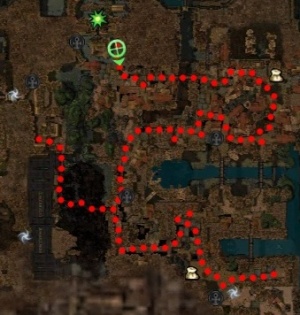 The Ministry of Purity is pretty busy these days cleaning up the Afflicted, but that doesn't mean we can let local matters get out of hand. A while back, I was investigating the arson of a local restaurant that used fire drakes to cook the food. Yes, it sounds weird, but I hear it was quite popular. At the time, we chalked up the incident to mismanagement of the little fire-spitters, but the drakes never turned up after our investigation. We finally got a report of some of them appearing in Xaquang Skyway, so I'm going to search for them. I've even bought this temperature-sensing device from a traveling merchant to help track them down. What do you say? Can you spare some time to help out?

Accept: Sounds like a hot new adventure. Count me in!
Reject: I'm not really warming up to this idea.
When asked about quest: Head over to Xaquang Skyway and round up those drakes! I'll meet you there.

Lei Jeng: "I picked up this device from a traveling merchant; I think it will help us in our search. It detects differences in the surrounding temperature. If we head where it is hottest, I'm sure we'll find something there. Stick close to me, and I'll let it point the way"
Lei Jeng: "From what I know, the drakes used in the restaurants were pretty domesticated,so we probably don't have to kill them."
Lei Jeng: "I hope word hasn't gotten out about these creatures running around; it certainly would throw the area into a panic. We'll have to find them before that happens."
Lei Jeng: "Look! There's one of the missing drakes over there. Let's catch it."

Lei Jeng: "Aha! Another of the fireball-spewing creatures. It seems frightened though. I wonder what got it so spooked."

Lei Jeng: "Am Fah! What are you doing with that beast?
Am Fah Assassin: "The Imperial Guard? Are they on to our plans already? Silence them quickly!

Lei Jeng: "The Am Fah are after the drakes too it would seem. They've probably got some plot in mind. We'd better find the rest quickly.

Lei Jeng: "Now the Jade Brotherhood? Where are you scoundrels going with that drake?"
Jade Brotherhood Warrior: "So, you found out about our plans, have you? Too bad you didn't bring enough fighters to stop us. Brothers, destroy them!"

Lei Jeng: "First the Am Fah, and now the Jade Brotherhood. What's going on here? I don't know what they are planning, but it's sure to be no good. Let's find the last of these beasts quickly."

Lei Jeng: "A gang fight! Looks like trouble!"
Jade Brotherhood Assassin: "The drake is ours you dirty scavengers!"
Am Fah Warrior: "So you can use it as a weapon against us? Not a chance fool!"
Lei Jeng: "Neither of you will have the drake! I'm placing you all under arrest!"
Jade Brotherhood Assassin: "How convenient; this buffoon of a guardsman has gone to the trouble of bringing the rest of the drakes right to us. We'll just kill you all and take them for ourselves!"
Am Fah: "We'll separate your heads from your shoulders first! Get them!"

Intermediate dialogue 8 (After the fifth Missing Fire Drake, Am Fah, and Jade Brotherhood groups are defeated)

Lei Jeng: "Well, that takes care of that. Now that we've got the last drake, I can take them back to the palace. The emperor will no doubt want to reward you for your help. Meet me back in Kaineng when you're done here."

I can't believe the audacity of these gangs! Using such dangerous creatures in their turf struggle, they could have brought the whole skyway down on the citizens below. One of these days, we're going to have to clean up those gangs along with everything else.
I've turned the drakes over to the Ministry of Fire; they'll know what to do with the little fire beasts. Here's a reward, on behalf of the emperor.

Start from Senji's Corner and pick up Guardsman Lei Jeng. You will have a "Heat Gauge" bar with which you can find the Missing Fire Drakes. When the bar is filled, it means Lei Jeng is very close to a Missing Fire Drake. You must find the Fire Drakes in a specific order, as they do not spawn all at once.

Start by heading east towards the corner, where you will find the first Drake. Give it a good beating, and it will join as an ally. The second drake is towards the northwest of the first. This drake will start by running away. Chase it down, and teach it a lesson. The third drake is past the burnt area filled with Vermin, with some Am Fah, that turn hostile as you get closer. The fourth drake is east of the third, on the other side of the map. It's guarded by a group of Jade Brotherhood. The final drake is at the exit to Bukdek Byway, where you will have to beat both Am Fah and the Jade Brotherhood groups.