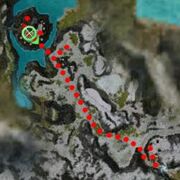 "Master Togo has sent Zho, Talon Silverwing, Panaku, and that bumbling Lo Sha to the monastery in Jaya Bluffs. He believes that the monks there might have some knowledge that will help us to combat this plague more effectively. Honestly, he sent Lo Sha, and yet someone of my obvious skills is relegated to the role of messenger boy. In any case, he wants you to meet them and give them any assistance they may require."

Lo Sha: "Ah, there you are. We were told to expect you, and I was quite relieved, truth be told. We have all heard tales of your exploits thus far, and we are mightily...." Panaku: "Still your wagging tongue, Lo Sha, or I shall make it still!" Zho: "Enough, both of you. <Name>, the situation is serious. Afflicted creatures have overrun the monastery. I fear we have arrived too late to save the Monks within, but we must try. We will follow Talon's lead and charge when and where he tells us. Panaku, this means you. Talon, we await your orders." Panaku: "I will kill when it is time to kill."

Talon Silverwing: "It is my hope that we will take them by surprise. Follow me, and when I give the order, strike quickly."

Panaku: "That was the last of them. It looks as though they finished off the Monks before we arrived."

"Although you are still learning, it is clear that Master Togo places a great deal of faith in you, and I am beginning to understand why."

Leave Seitung Harbor by the northern exit and into Jaya Bluffs. Head northwest once outside. As you near the bridge to the monastery you will see the headmasters a little off to the right. Proceed into the midst of the four headmasters to initiate a dialogue and get a quest update. You are all to assault and clear out the Afflicted and Sickened from the monastery. Despite Zho asking Talon Silverwing to lead and direct the assault, they will all stop on the bridge. It is up to you to attack. Within the monastery grounds itself, there are three clumps of enemies. Take them out one at a time. Stay close to the bridge to avoid having to fight more than one group at a time. Once the monastery area is free of enemies, speak to Zho to complete the quest.