Lumo is an NPC who can be found during the Tihark Orchard (mission). You have to defeat him in a mime-challenge in order to receive the bonus. Lumo mimes emotes, which you have to recognize and mirror. You need to match 10 emotes in a row to win the contest.

Lumo has the same emote animations as a male ranger, and he is known to use the following emotes in the mime duel: 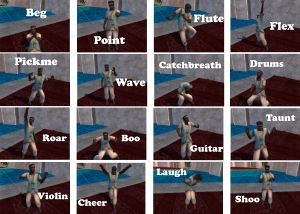 /beg (He falls to his knees.)
/boo (He raises both hands abruptly and thrusts his head and arms forward, towards the player.)
/bored (He shrugs his shoulders forward with arms at side.)
/breath and /catchbreath (He bows forward, breathing heavily.)
/cheer (He stretches both arms in the air.)
/dance (He does the male ranger "breakdance".)
/doubletake (He thrusts his head towards the player twice.)
/drum /flute /guitar /violin (He plays the respective "air" instrument. In case of the flute he stands on one leg.)
/excited (He claps his hands.)
/flex (He does a classic greek pose with one arm towards the ground and one behind his head.)
/goteam (He puts his hand towards you and bows and stands.)
/laugh (You can see his chest shaking.)
/pickme (He points towards himself with both arms.)
/point (He points towards the player with one arm.)
/ponder (He puts his hand towards his chin.)
/roar (He stretches one fist in the air.)
/shoo (He waves both hands in front of his chest, towards the player.)
/taunt (He waves both hands beside his face and shakes his head.)
/wave (He waves with his left arm.)

The emotes can be clearly seen when zoomed in all the way to first person perspective; consult the graphical chart on the right.

If you fail the challenge: