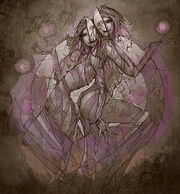 Mural in the Breach. 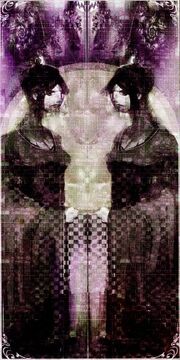 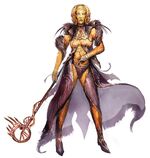 Dervish as Avatar of Lyssa

Lyssa (sometimes only called Lyss) is the twin goddess of beauty and illusion. She is the patroness goddess of Mesmers and Assassins. She is also associated with Energy, Chaos and the attributes of Energy Storage and Mysticism.

The twin goddesses of beauty and illusion, many a spell caster has fallen under the charms of these two, making it easy for them to choose to specialize in the mesmeric arts. Lyssa is usually portrayed in her natural state; a pair of twain, intertwined goddesses, back to back, no illusions or glamours involved. There are stories of young men stopping to gaze longingly at statues of the beautiful goddesses, only to forget themselves and die of thirst while simply looking on.

-- Taken from the Lore booklet.

This inscription can be found on the Statue of Lyssa:

The Festival of Lyss is an annual Vabbian celebration held on the Day of Lyss, to honor the goddess Lyssa, patroness of Vabbi, who, according to the lore, "shaped the land" and "molded the Vabbians in her own glorious image".