"With this plague running rampant throughout the city, the emperor's forces are stretched too thin, and a number of rogue guilds have taken advantage of the chaos. As a result of numerous complaints that have been filed with the Celestial Ministry, the emperor has hereby declared all members of the Am Fah enemies of Cantha. He has placed a bounty on all of this guild's members. Bring me 5 Plague Idols, and I shall give you this in return:" 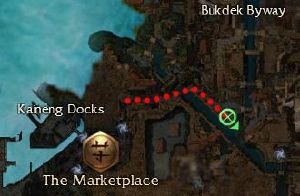