Mayhem in the Market 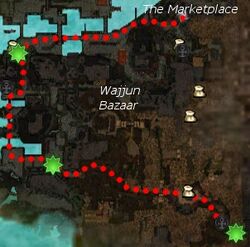 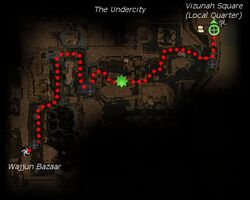 Path through the Undercity for parts 6-8

"Master Togo has gone to the palace to see if the emperor has any useful information about the plague. As I'm sure you know, the Emperor and Master Togo are brothers...Master Togo's mother caught the eye of Emperor Kintah, our current emperor's father. Not many are permitted to enter the emperor's palace, but he permits Master Togo entry because of their shared blood.

"While we wait, I have a task for you. I sent some of the other monastery students out into Wajjun Bazaar to speak with the locals to gather information about this plague. I'd appreciate it if you could go find out what they've learned and then report your information to Master Togo. The information may prove invaluable in determining the source of the plague."

"Headmaster Greico sent you? That is reassuring. I went to visit my family to make sure they were all right. Apparently my sister left for the Echovald Forest to study painting. This is so scary, do you not think? I found out from my mother that the Obsidian Flame guild is helping the guards keep the city from falling apart because of this plague. I am sure with Master Togo's training I can make it through. Fear cuts deeper than a blade; I've got to remember that."

"This is why we studied under Master Togo, is it not? Talking with my old friends I have discovered that this plague came out of nowhere. The emperor is doing all he can, but apparently it is not enough. To all things must come an end, and this plague is no different."

"These streets are strange and hard to navigate. To be honest I feel less of an outsider here than I did back on the Jade Sea. I overheard some traders talking of the Luxons and it seems that our nomadic ways have prevented the plague from affecting my people."

"This is not a game anymore. I tracked down some of the plague creatures, but thought it best to keep my distance and observe them for a while instead of rushing in like I might once have done. While I was waiting, I talked with a Kurzick from Echovald Forest. He was saying that the war between Luxon and Kurzick continues apace. Old hatreds can burn for generations, eh?"

"Looks like another opportunity for Lukas the Great. Do you like the new title? I think it most befitting in such a great city. This adventure in Cantha will be just the thing to impress Danika. Master Togo just passed through here looking for Jinzo. He had sent the two of us here to look into possible causes of this plague, but once Jinzo saw the destruction in this place, he went a bit crazy and ran off into the sewers. I would have gone after him, of course, but I had more heroic things to do."

"The horror... the complete devastation... I knew it was bad but I did not think it would be like this.... Whole families wiped out... innocent children left to wander the streets.... If only I had become a Monk. Perhaps I could have done something to prevent this."

"Thank you, <name>, this information is helpful indeed. I am also relieved to say that my trip to the palace proved worthwhile. I believe I have found the place where this sickness originated. It is a very dangerous place, even at the best of times, and the emperor has now ordered it sealed in an attempt to stop the spread of the plague. I have spoken with the guard there, however, and he knows to expect you. I will stay here with Jinzo until he is himself once more, but I will catch up with you shortly."
"Do not worry, <name>. We will not be alone. Mhenlo, a talented former student of mine, will be joining us there, and I am certain he has brought more help."

"An imperial herald already came by with a letter from the emperor granting Master Togo entry. I am not about to defy the will of the emperor by telling you not to go, but I fear that the only thing that awaits you past this point is death. I hope I am wrong and that you can stop this plague before it destroys more lives. Are you sure you want to continue?"
"You enter this area at your own risk. The Celestial Ministry absolves itself of all responsibility for your safety."

"Well, I cannot say I think this is a wise choice, but for all of sakes, I pray you succeed. Dwayna keep you safe."

In this quest you need to talk to several NPC's in Wajjun Bazaar. After which you will be sent to the Undercity to talk to Master Togo. Master Togo will then redirect you to the next mission: Vizunah Square (Local Quarter). However there's a whole army of Afflicted between you and the portal. After you've fought your way through the Afflicted you must speak to Guardsman Pei to travel to Vizunah Square.

Tip: When faced with a very large group of Afflicted, move back a little and wait patiently. The large group will eventually split up into several smaller groups that you can pick off much more easily.

Shortcut: After talking with Master Togo, use the Map to travel back to The Marketplace and exit through Bukdek Byway. From there, follow the green arrow and you will fight MANY fewer Afflicted. This way is safer, shorter, and easily henchable. However, be careful when you run into The Afflicted Miju, as many afflicted spawn when you get near her.