Mehtani Keys is an explorable area in Istan consisting of a series of small, sandy islands surrounded by shallow water. There are several old structures in this area, including the famous statues at the monuments of Nahlah and Dhalah.

Note: The following quests are only available to Nightfall characters.

Momuments to Nahlah and Dhalah 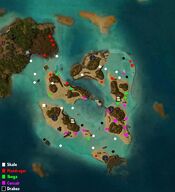