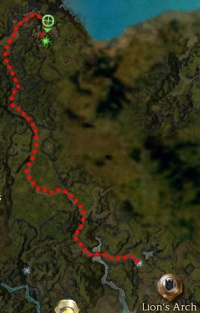 "Listen, friend, I'm in a spot of trouble. I promised to deliver a shipment of herbs to the new Ascalon settlement, but with all the Tengu on the roads, no one has been able to make the delivery."

"I do have a nephew in the Lionguard who should've helped me out, but that ne'er-do-well has a talent for disappearing whenever you need him, if you know what I mean."

"What do you say? You look like you can take care of yourself. Could you deliver this strongbox to Captain Greywind in the Ascalon Settlement for me?"

"Thank you, <name>. I had begun to fear that Bodrus would not keep his word. He had charged us quite a sum for these medicines. I was loathe to send a heavily armed group into town, lest we provoke the Lionguard, but I was beginning to consider doing so."

"Truly, you have saved us from what might have been a diplomatic disaster. Unfortunately, I have little to offer by way of reward except my services in teaching skills."

Head west across the bridge and then north following the signposts to reach the settlement. Ascalon Settlement has a skill trainer and a collector as well as being the starting point for several quests. Consider doing this quest at the same time as The Ascalon Settlement quest since they go to the same location.