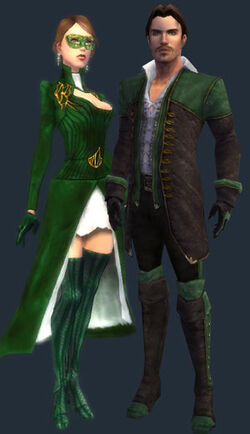 The Mesmer is an expert in indirect damage and control, specializing in turning the opponents tools on themselves: attacks end up damaging the attacker, spells interrupt the caster and companions, and hexes are stolen to be turned against the opposing team. Mesmers can also influence the enemy's actions by restricting, delaying, or preventing attacks or use of skills. Players wishing to create an effective mesmer must therefore become experts in the other professions.

Because of the steeper learning curve, many players are unfamiliar with the profession; in PvE, it can be hard for mesmers to be accepted into pick-up groups. The better players know, however, that even moderately skilled mesmers can turn battles quickly and decisively in the party's favor. Mesmers are particularly devastating in PvP and nearly every GvG will have at least one.

The mesmer's primary attribute is Fast Casting, which reduces activation time of both spells and signets. Their primary base armor provides an AR of 60, with +10 energy and +2 energy regeneration; they begin with a base energy of 30, regenerating at 4 pips. Many of their damage-dealing skills ignore armor, allowing the mesmer to devastate hardened Warriors and enchantment-protected Elementalists, as well as bypassing some of the innate protections of bosses and hard mode-buffed foes.

The patron deity of Mesmers is Lyssa.