Message on a Dragon Scale 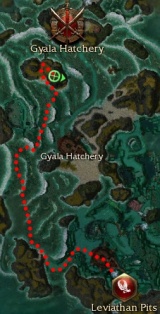 "One of my crews found this... thing while we were reaving a rich deposit of jade. It was deep... really deep. I thought it was valuable, and it no doubt is valuable, but look at this part: a message! Deep as it was, it must have ended up in the sea more than two hundred years ago. The only spot of actual land nearby is a small island in the Gyala Hatchery, a little spot of dirt so insignificant we've never bothered to go out there. I certainly can't read it, that's for sure. Maybe it's a treasure map? A plea for help? I sure would be interested to learn who it belonged to... it could increase the value tenfold if it turns out to be some famous historical figure. It may even have been Archemorus himself! Will you search for the mysterious island near the Gyala Hatchery and tell me what you find out about this message?"

"And now the saltspray dragon came, and he was tyrannous and strong: he struck with his o'ertaking wings, and bid me come along. The fearsome... why do you look at me so? Mayhap my way of speaking troubles thee? Very well, I shall... wait! Thou'st carry a... that is, you carry one of my messages! Long ago, I was stranded here after a shipwreck. I remember almost nothing, except a seabird of some kind, and a... dragon? Yes! A dragon! She would not rescue me, but she gave me a means to escape on my own. She left four of her scales and bid me to inscribe them with messages and hurl them into the sea. The dragon granted me immortality so that I may await their return, but at the cost of all other memory. Though the seas are no longer liquid, I cannot leave this island until I have all four messages... for if I do not regain the scales, I will die the moment my feet leave this sand.

But you have brought the first message back to me. The first after many, many years of waiting. Now I can return to my vigil, heartened by the possibilities of more messages to come.

"He chose to stay there? Well, it is his ship to sail, as the saying goes. An intriguing story, though. I wonder what would happen if someone found all four of those messages?"

After receiving this quest, travel to the Leviathan Pits and enter Gyala Hatchery (explorable) from there. Then head north to the small island just south of Gyala Hatchery (outpost) and talk to Samti Kohlreg. You can easily run this quest, if you watch mob movements, they can be avoided. Then travel back to Seafarer's Rest and talk to Great Reaver Rixor to complete the quest.