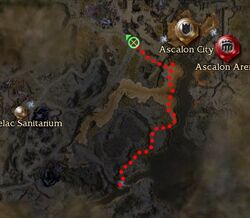 "We have something of a military emergency talking place. When Barradin and his Vanguard broke through the Charr lines to Piken Square, they created a weak point in our line. Our scouts report that Charr forces are massing to try through the Breach, and we've not enough men in place to stop them. We need to reassign our forces quickly!

If you are willing, I'd like you to gather up a patrol that has been watching the road in Regent Valley. The patrol leader is Sergeant Clark. I'll need you to bring him and his men back to me for reassignment. What say you?"

Accept: "You can count on me, sir!"
Reject: "I respectfully decline."

Sergeant Clark: "Warmaster Grast orders us to report to him? Lead the way! I know better than to disappoint the Warmaster again. I still haven't recovered from the last time."
Sergeant Clark: "Men, prepare to move out! Fall in line behind <name>!"

"The patrol! Well done! You are a credit to Ascalon, <name>. Clark, take your men, head into Ascalon City, and gather as many able-bodied fighters as you can!"

The patrol will be found in Regent Valley close to the area boundary to Old Ascalon. The shortest route to reach them is from Sardelac Sanitarium.

Alternate route: As shown on the map, rather than going from the sanitarium, leave from Ascalon City and travel underneath the bridge (turn left), following the dried stream, a slightly longer walk, but there are far fewer monsters and so is less dangerous.