Mineral Springs is an explorable area in the heart of the Shiverpeak Mountains. It is very different from most other places in the Shiverpeaks as the snow is mixed with a yellowish hue and causes a strong glare. The springs themselves are found on the northern route in the center of the area.

While this is a "dead end" explorable area, it has a few attractions to offer:

Even though Infusion can also be performed here, it is generally considered much more difficult and time consuming compared to an infusion run at the Iron Mines of Moladune. Thus, most people who have their armor infused here are typically here for other purposes, and happen to have extra armor they haven't bothered infusing before.

The area can be generally divided into 4 parts: the northern path, the southern path, the eastern mountain trail connecting the two paths, and the ice cave in the Northeast.

The northern path and the southern path meet at the southwest corner of the area, where there is a portal to Tasca's Demise, and a Resurrection Shrine. Both paths wind about much of the explorable area, until they connect to the respective ends of the mountain trail. The Avicara Tengu patrols much of the three areas, with some Pinesouls and Ice Imps scattered about. Some Mountain Trolls and Siege Ice Golems can also be found, usually with the Ice Imps.

The cave at the northeastern end of this area is the only known place where the Icy Dragon Sword can be found. It also has a statue of Lyssa. Through the South exit of the cave, you will find the Ice Beast with Spectral Essence and a Seer. 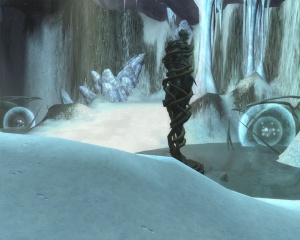 In the Ice Imp cave in the northeastern corner, the traveler will find a statue of Lyssa. The statue is flanked by a pair of two great dish-like devices half immersed in water, the slow pulsation of which can be heard as far as the entry of the cave. The avatar summoned by kneeling at this statue offers the usual blessings. 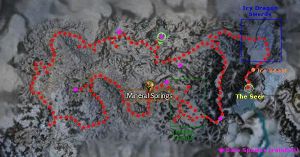