Miniatures, also referred to as "mini pets," are in-game vanity items that can be obtained through various sources. When activated, a small duplicate of the named creature will appear and follow you around. Miniatures were originally created as "birthday presents" to show appreciation for long-time players, but have since become available through many other means.

The miniatures a player has collected can be displayed in the Monument of Devotion part of the Hall of Monuments in the Eye of the North expansion.

Miniatures can be acquired in many ways:

Details on the acquisition of each miniature are given in the tables below.

Gift of the Traveler[edit | edit source]

1 The Black Moa Chick, the Brown Rabbit and the White Rabbit are the only Miniatures whose names do not start with Miniature because they are actual size.

2 The Miniature M.O.X. has a chance of appearing as his normal self, or one of his 5 Avatar Forms when doubleclicked.

3 In both France and Germany, two different magazines distributed codes for a Miniature Asura at different times: the May '07 Joystick and the November '07 PCJeux in France; and the May '07 PC Games and the October '07 GameStar Special in Germany. In both countries, if a player purchased both magazines, the extra code could be exchanged for a Miniature Destroyer.

These are unique miniatures owned exclusively by Gaile Gray, given to her by the developer team in recognition of her long-time service as ArenaNet's Community Relations Manager. 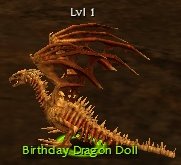 Miniature/Birthday Doll with a name and level in an outpost.

Miniature Birthday Doll with a name and party icon in an outpost.