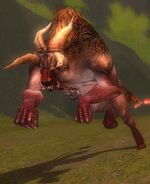 A Forest Minotaur running in the wild.

Minotaurs in Guild Wars are large bulls with a slight humanoid touch. They have the head, torso and hind-quarters of a bull but with two large human arms. They run on their hands and legs like oxen (with clenched fists), but they occasionally stand on their hind legs and walk around.

Minotaurs are brutally strong, very fast and enjoy running like nothing else. Their patrols will be seen dashing across the landscape with great speed. In an area infested with minotaurs, players would do well to examine their patrols quickly and keep an eye on their radar, as they can blindside a party easily. All minotaurs in the game seem to suffer from limited intelligence; after they have been hit, they take a few moments to start attacking. Sometimes a player will attack them and they will continue running for a bit (often activating their stance as you come into range), stop, and come back to retaliate.

In addition to "true" minotaurs, the minotaur family is suspected to include other forms of monstrous cattle encountered in the Far Shiverpeaks.

For a complete list of Minotaurs, including bosses, see Category:Minotaurs.