Money on the Side 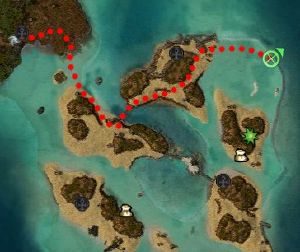 Map to Dzaga's location with the rendezvous point present

1. Go with Dzaga and his band of smugglers to the rendezvous.
2. Watch the deal go down and make sure it goes smoothly.
3. Kill the treacherous Sakku and his cronies!
4. See Dzaga for your reward.

"So, you want to make a little money on the side, eh? Away from the watchful eyes of the elder, huh? That's what we're all about here. Here's the deal: you come with us to the rendezvous and provide extra muscle to make sure things go smoothly. It's a simple job, so try not to screw it up."

Dzaga: "Ah, Sakku. It's good to see you on time for once."
Sakku: "Enough banter, Dzaga. Let's talk prices."
Dzaga: "You know the deal, Sakku. Nothing's changed. Price is non-negotiable."
Sakku: "Perhaps you could be persuaded to change your mind, Dzaga? I find myself short on cash."
Dzaga: "I've been working this deal for months, Sakku. Don't tell me you're backing out now."
Sakku: "Not backing out, just changing the terms. The new deal is this: you give me the goods and I give you your life."
Dzaga: "Pah! You know better that to threaten me, Sakku. Fork over the money. I know you can afford it."
Sakku: "Maybe I've learned a few things since last we met, like bringing friends with me to a meet. Get 'em boys! Careful of the goods. Anything you destroy comes out of your pay... and outta yer hides!"

"Well, things didn't go very smoothly did they? You know, they never do, which is why I always come prepared. And you did your part just fine. You certainly earned your pay. Here you go."

After accepting the quest, lead the corsairs to the rendezvous point. Note, you can avoid some combat by skirting around the larger group of enemies while the corsairs will go straight through without harm, however once you reach the rendezvous point the monsters will suddenly attack and you need to defend Dzaga. Note also that you have to go past the green star on your compass to get Sakku to spawn. Dzaga will be attacked quite quickly, so stay alert and don't let him be killed.