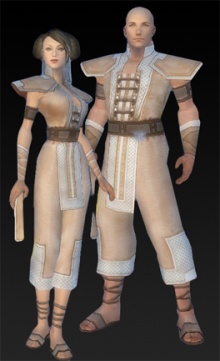 A female and male monk

The Monk indisputably possesses the strongest ability for healing other characters. Divine Favor adds a healing buff to all Monk spells, as well as improve the Monk's overall effectiveness. Healing Prayers are generally used for direct healing, as well as indirect healing-over-time. Protection Prayers is the attribute of choice for reducing and even preventing damage. Smiting Prayers allow Monks to deal damage to enemies - especially effective against the undead. The patron goddess of Monks is Dwayna, with the exception of smite Monks who are devoted to Balthazar.

The Monk is widely considered the heart of a party so it is very common for them to be primary targets.

The Monk's primary attribute is Divine Favor, which provides additional healing to each Monk spell.

See Secondary professions for a Monk