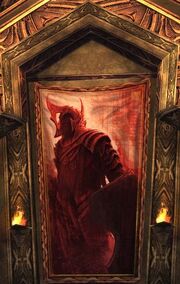 The Monument of Resilience showcases trophies for Elite Armor.

Eye of the North:[edit | edit source]

There are two types of trophies on this monument.

The first type is a life-like statue of your character wearing the displayed armor set. This type of trophy always appears in the personal view of the Hall of Monuments, and also in the account view if the specific armor set exists for the profession of the character currently viewing the Hall.

The second type is a bronze statue of a male and a female representing a sample of the armor set series. This type of trophy only appears in the account view of the Hall of Monuments, and only if the displayed armor set is not available for the profession of the character currently viewing the Hall.

Certain armor styles are available to all 10 professions, and thus will never have a bronze statue. These styles are:

All other armor styles have the possibility of appearing as either of the two types of statues, depending on the profession of the character viewing them.

The following is a gallery of the available bronze type statues, also showing the gender and profession of the displayed characters. Click on any of the pictures to see a zoomed-in version for greater detail.

Your accomplishments on the Monument of Resilience contribute points to your rewards in Guild Wars 2, up to a total of 8 points, according to the following list: