The Rally for Mursaat Rights in Eye of the North, more commonly known as the Mursaat Rally was an in-game event that took place in the Maguuma Stade International Districts, starting on April 14th 2007 and 2008(the 2009 Version has been called The Whitemantlecon) at 5PM GMT. It was organised by Quintus Antonius, guild leader of BaR and GWOnline Lore Forum moderator. Its purpose was to persuade ArenaNet to give the Mursaat a role in the expansion, Guild Wars Eye of the North. ArenaNet did notice the event and their community relations manager, Gaile Gray, made an appearance with fireworks and a horde of Mursaat spellcasters in town.

The idea was originally presented in a thread started by Quintus Antonius (which has unfortunately since been lost in a forum rollback) to the community in GWO's Lore Forum. In the thread, members discussed the event and jokingly submitted many Asura-bashing flyers with taglines such as "You cannot fight what you cannot see". Another thread was then posted in the Community Lounge displaying some of the many posters made in anticipation and a basic outline of the event, where it received even more attention. The event ultimately proved to be a success, filling a total of four districts. 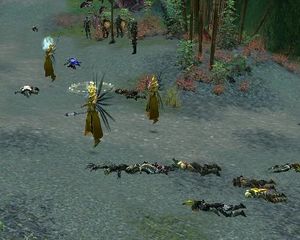 How Mursaat reward their faithful

Quintus Antonius made two speeches throughout the event, as well as participating in rallying such as cries of support and cheering. The (loose) dress code was white and gold, and food and alcohol was given out, along with Litanies of the Unseen, Mursaat Tokens and White Mantle Badges.

At approximately quarter past six GMT, midway through Quintus' second speech, the Mursaat made their first ever appearance in the Maguuma Jungle. Although they have always been rumoured to have a city on the banks of the Ullen River (it was this fact, coupled with the proximity of Maguuma Stade to the Tarnished Coast that caused the rally to be held in this area), they had never been physically seen in the Jungle until that day. The Mursaat proceeded to kill everyone in the district, after which Gaile activated fireworks with her developer commands.

It is currently unknown whether the team at ANet had any intention of including the Mursaat in GW:EN before the event, but the White Mantle are involved in several quests and in the dungeon Slavers' Exile.