Just like last year, posters and flyers will be made for the upcoming event. Only this time, they will mirror Guild Wars 2.

The Rally for Mursaat Rights in Guild Wars 2, also known as Mursaat Rally 2, was an in-game event that took place in Maguuma Stade International Districts, on Saturday April 12th 2008 at 5PM GMT/12PM EST. Its purpose was to once again to persuade ArenaNet to give the Mursaat an important role in Guild Wars 2. The event was being organized by Loremaster Kalidri and Loremaster Gmr Leon of the Guild Wars Forums Online Forums, and Barinthus, the current leader of the guild, Blade and Rose, along with several of its other members.

The Intent Behind the Rally[edit | edit source]

The intent for the second Mursaat Rally are listed below: 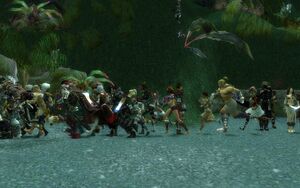 The ralliers celebrate the Mursaat by doing what they know best: a conga!

The Mursaat Rally 2 was planned to take place in International Districts 1 & 2 of Maguuma Stade. However, due to many players being away from their computers, it was organized into the American District 1 for the active supporters.

After finally organizing those in American District 1, there was another speech given by Leon Wyvern and several of the Divisionary Leaders. Once the speech was over, Daniel Frozenwind held the costume contest and gave out the prizes. Once over, Leon and the Divisionary Leaders called upon those present at the Mursaat Rally to invade Lion's Arch and dethrone the Royal Family. Once that had been done, they rallied once more to invade Kamadan and that is where the Mursaat Rally ended.

The attendees had fun creating their own posters for the event.