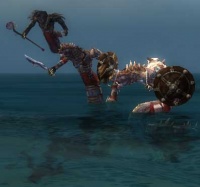 Nagas leaping out of the water to ambush passers by

Naga are a serpent race that dwells in the hills near the shores of the Jade Sea and on Shing Jea Island. Their lower torso is a snake's body while their upper torso is human, and they have Cobra-like heads. They are probably a reference to the Nagas of Indian Mythology: according to the Oxford English Dictionary, Nagas are Members of a race of semi-divine creatures, often part-snake, associated with rivers, rain, etc. Despite a similar appearance to The Forgotten of the Crystal Desert, they are unrelated species.

In Factions lore, Naga are the mortal enemies of the Tengu. Once driven to near extinction when the Jade Wind turned the Jade Sea into the mineral from which it took its name, they now aggressively attack those who venture near their territories. According to the Factions manuscripts, the intelligent Naga were in the past a species of merchants and artisians who were at peace with the Humans, until the Jade Wind nearly destroyed the entire race. The Naga priestess Hanasha Coralfin, who united the less than 40 remaining Naga, established a warlike and expansive culture that seeks vengeance on the humans who they blame for their catastrophe.

For a list of all Naga including Bosses, see Category:Naga.

During the Day of the Tengu players received quests from the Master of Celebrations in which they had to destroy Naga.

Naga in myth are sprites that work for the gods. The naga in Guild Wars appear to be from Dungeons & Dragons.