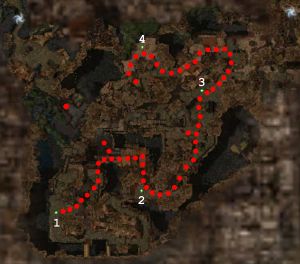 Defeat the Celestial creatures to become Closer to the Stars.

You will have to defeat the four Celestials:

Portals from left to right:

When a Celestial is killed, analogous essences will spawn throughout the mission. The mission thus becomes harder as more bosses are killed, with essences scattered throughout the map in addition to the Star Tengu. The essences are never linked to the Tengu, so the large groups that remain after two or three bosses are killed can be pulled apart. The essences do not leave exploitable corpses and Essences of Turtle exploit the Tengu corpses quickly, so builds that rely on exploiting abundant corpses are not viable.

The Map Area window indicates the location of the four Celestials using star icons. You can take them in any order. The monks are smiting monks, so they won't bring heavy healing to slow you down. Star Lights do have significant healing capabilities, however.

Each Celestial is guarded by several Star Tengu, in addition to essences that have spawned from the defeat of previous Celestials. As with non-boss groups, for the later bosses, it is necessary to pull the groups apart, as the essences can be pulled separately. A slain Essence will respawn if a party member comes near its spawn point at least three minutes after it was killed. Star Tengu and Celestials do not respawn.

The mission ends when you kill the final Celestial, so you can focus fire on the boss and ignore many other mobs around it attacking you. It may still be easier to clear some other mobs nearby before attacking the boss, however.

If you have difficulty with the mission, completing the mission is much easier if you clear all of the Star Tengu before taking on any bosses. This way, you will never have to pull apart the Tengu and the Essences that spawn on top of them. Taking this approach will cost you master's reward, however.

One of the most common mistakes by amateurs in PUGs is miscommunication over which portal to go through at the start of the mission. If a member goes through a different portal to the rest of their party they will be separated from them and will not be able to rejoin them unless the party fights its way to the missing member. Although this may seem such an obvious mistake that you shouldn't need to worry about it, it is fairly common. Make sure all members of the party know which portal you plan to go through before beginning the mission.

It does take a reasonably brisk pace to get master's reward in this mission, but it's quite doable even with only one player and seven relatively defensive henchmen.

It is recommended that one start with the Kirin (location 4) and work towards the Phoenix (location 1), although it is possible to work from the Phoenix to the Kirin.

Notable shortcuts are visible on the attached Map. Take note of the path between locations 3 and 2 as well as the sharp turn to the North at location 2, the dragon. With going north here, up to three minutes can be shaved off of the time as there are fewer monsters to deal with (29 instead of 50). Nevertheless most groups will take the obvious path instead.

If short on time when you reach the final boss, you can charge in, focus fire on it, and try to kill it quickly enough. Killing the final boss completes the mission, even if you would have wiped shortly thereafter.

Note that mobs do not come in large linked groups. Rather, large clusters of mobs after two or three bosses are dead are several separate groups and can be pulled apart. It is vital that you pull mobs apart rather than charging into them. If you pull only a few mobs at a time, the mission is easy, but eight or nine at a time can and probably will wipe your group.

Adept Nai: The celestials and their guardians have been summoned. You must defeat them if you wish to become Weh no Su.
Upon the destruction of a celestial, its essence will spread, creating countless smaller celestials that will endlessly return, much like the stars in the night sky.
The difficulty of this task increases with each celestial you encounter, since you will face not only that celestial, but the essence of those you have already defeated, as well as the celestials' guardians.
Pass through an orb to begin your trial. You will find yourself transported to a location near a celestial you must defeat.

Suun: I see that I have underestimated you.

Suun: Forgive my harshness. There are those who take the power of the stars for granted.

Suun: I see you have encountered them already.

Suun: The Ministry are nothing more than an overfed bunch of paper pushers.
Good for little other than playing parlor tricks at a Naga cub's birthday party.
Well, you'll understand then when I don't welcome all of those who come looking to become Closer to the Stars.
Now you will excuse me. I have much work to do.

Suun: Go talk to an Adept!

Dead Man: Are you an Envoy?

Dead Woman: Are you here to take us to Eternal Paradise?

Shiro Tagachi: You're not going to Paradise.

Dead Woman: What are you going to do with us?

Shiro Tagachi: I'm going to make you into my soldiers.
You're going to fight for me.

Shiro Tagachi: You will do whatever I tell you.
Kneel!
Bow before your new master.