From GuildWiki
(Redirected from Nearby)
Jump to: navigation, search

Skills and attacks all have a certain range. A character trying to attack or activate a skill must be within range of the target before the attack begins or the skill starts to activate. In most cases, issuing such a command from out of range will have the character attempt to move to within range in order to perform the action.

The testing circles at the Isle of the Nameless

A view closer to top-down 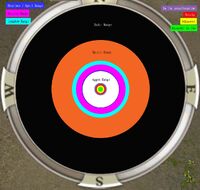 A color-coded view of ranges on the in game compass

1 Some skills do not have a specific target but affect the entire party. Those skills will actually only affect party members in selection range.

2 Projectile weapon ranges given here assume the target is at the same height as the attacker.

In some game updates, ArenaNet has referred to compass range which is the same as selection range.