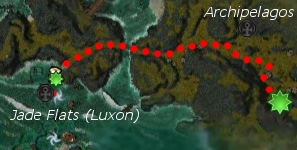 "We of the Tortoise Clan send our reavers into the glassy sea to mine the most precious jade... and if possible, to retrieve treasures long hidden beneath the eternally still waves. One such treasure, a mighty behemoth of the sea, was recently discovered in Archipelagos. It has, in fact, already been sold to a Canthan noble by the name of Tahwaj Zing. But the quarrymaster is concerned. Something has been attacking our reavers during the night, making it difficult to excavate this creature in time to satisfy our client... his impatience is frankly getting on my nerves. This sort of thing happens frequently, but now Tahwaj Zing threatens to cancel his purchase if we don't deliver this particular piece on time. We could use your aid, <name>. Will you go to Archipelagos and speak to the quarrymaster, Reaver Tammox?"

Accept: "It will be my pleasure."
Reject: "For people that prize strength, you sure ask for a lot of help. Find someone else."

"We thought they were Kurzicks. Kurzicks are hitting us all the time. But we finally killed one of them, and it was no Kurzick... it was a Naga! It must be that tribe led by Xiriss Stickleback. He used to hunt the roads near here, a bandit and a thief. Don't know why he's attacking us now, but we don't have time to deal with them. Here's what I need you to do: find Stickleback and take his head. Bring it to that Canthan noble and tell him we're back on schedule. If a severed Naga head won't convince him we're sincere, I don't know what will."

"It was a Naga? Well, no wonder! These creatures attacked my rickshaw driver on the way here from Kaineng City... but now that I see this, I know the Luxons are sincere. You never can tell with provincials, you know. Please accept this token of my gratitude."

After accepting this quest, the best place to start it from is Jade Flats (Luxon), exit from there into Archipelagos and speak with Reaver Tammox. Then head to the east and kill Xiriss Stickleback. Travel to Eredon Terrace and exit into Maishang Hills, travel a little ways to the south-west and talk to Tahwaj Zing to complete this quest.