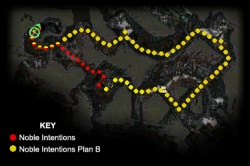 "Well, uh, that didn't go so well. Seems money can't buy everything. Guess we'll have to improvise. If ye'll continue to assist me in my efforts to retrieve my brother, there will be something extra in it for ye."

Accept: "We've come this far. Let's see this to the end."
Reject: "You're right, money can't buy everything. You're on your own."

Intermediate Dialogue 1 (spoken while heading towards where Ural is located)

Orozar Highstone: "Grab a master gear out of the gearbox over there; we'll need it to get across the bridge ahead."

Orozar Highstone: "All right, grab my brother and let's get out of here!"

Intermediate Dialogue 5 (repeated often until the bridge is lowered)

"I'm sorry for involving ye in this fiasco with my brother, but ye were certainly instrumental in his rescue. My family owes ye a debt of gratitude."

This is a very challenging quest that needs to be done with care. One of the best preparations for this quest is to bring a Necromancer who can conjure a lot of minions. The biggest challenge of this quest is that as you flee, Orozar will engage enemies at the front, but enemies will also catch up to you from the back. A minion master can provide a cushion at the back to prevent the enemies from overrunning your spell-casters.

Speak to Orozar, he will determine that he must face his brother. Follow him and slay the groups that he engages. When he meets his brother Ural, you will see a cutscene in which Orozar will ensnare him with an enchantment. As soon as the cutscene is over, have two party members pick up Ural and a master gear from the gearbox next to you. Then everyone follow Orozar to the bridge and lower it.

The idea of the quest is to flee back to the entrance without getting overwhelmed. Still, because you cannot simply run (Orozar will stop to engage enemies), you will get sandwiched between the groups blocking your escape route, and the group chasing you from behind.

Here are some helpful tips to overcome the sandwich:

After speaking to Orozar to get the reward of Noble Intentions, do not speak to him again. Instead, leave this room and go back to the main hall (general direction is north-west). As you approach the passage leading to the exit you'll see another path leading off to the right (it's the path you take to get to the Crushers in the quest Cold One). This is the path that Orozar will bring you through to escape. Take this path and fight and clear all monsters along the way, keeping to the right. The path will turn and rise until you get to the other side of the bridge. You cannot lower it from there, but since the path forward is now clear, you will not be overwhelmed as much from both sides. You can simply make a stand and defend yourself when enemies coming from behind catch up. You can now go all the way back and talk to Orozar to start the quest. Once you cross the bridge, you will still encounter enemies approaching from ahead even if you already cleared the path, but you will face an easier challenge. Head toward the exit and then speak with Orozar for your reward.

While crossing the bridge, if enemies pass beneath it, Orozar will stop and try to fight them. If this happens, Orozar will be stuck; since there is no way for him to get to them, he will just stand there, and so will they. In this case, you can simply turn and face the other way and defeat the group coming to chase you before killing that small group under the bridge (with spells) and releasing Orozar. To prevent this entirely, clear out the hostiles beforehand.

There is an easier way to complete this quest and avoid the sandwich altogether.

Speak to Orozar as normal, and go retrieve Ural. Once you arrive at the bridge, do not lower it. Simply leave Orozar there, and take Ural back to the entrance by retracing your path. You will have to fight some enemies along the way (if you didn't defeat them earlier), but now you don't have to worry about Orozar. Once you drop Ural at the entrance (he will automatically drop when you pass though the double doors Orozar was standing next to at the beginning of Noble Intentions). Be careful not to leave Sorrow's Furnace! Your quest log will be updated. Now you can return to the bridge and speak to Orozar for your reward.

If you do this quest this way, make sure to eliminate all patrols in the area before leaving Orozar, as one could find its way up to where he is and kill him. This would cause the party to wipe and be kicked out of Sorrow's Furnace.

This has been extensively tested, see the discussion page for more detailed accounts of this research.