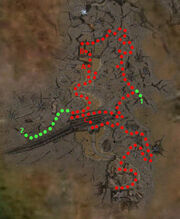 Return Prince Rurik south of the Wall to safety.

The idea in the first part is to sneak out and attack the siege forces from the back. Just start exiting the acadeamy east, and then south, until you reach the wall. Upon descending from the wall, keep right and then left up the ravine to get back to Rurik. While approaching the mobs in front of Rurik, a group of 3 archers will come down from the left/west, which can be a great help through the rest of the mission if you keep them alive. Kill all Charr at location B on the map and get Rurik at location C on the map. Basically, you then just keep up with Rurik and help him. Try not to get overwhelmed, as there are some large mobs. Note that when clearing the Charr at location B, killing the boss can sometimes trigger the gates to open prematurely.

After the cut scene, Rurik will take you south of the wall, first to the horn Stormcaller and then lead you to Rin, where you will take on successive groups of Charr, culminating in final boss, Bonfaaz Burntfur himself; one of the Charr responsible for the Searing, and the one who managed to launch the invasion that caused the Great Northern Wall's resistance to falter.

There are two short cuts not shown on the map above, one for before and one for after you pass the Wall.

The first part of the mission can be done by opening the doors of the academy (pulling the lever) and keeping Rurik alive while killing the Charr that rush in. You will need to kill an average of 15 level 8 Charr all at once, which is impossible with the standard level 10 story line party. Rurik can survive if healed. Area effect spells are highly recommended on the narrow entrance ramp. Keeping near the walls of the academy can help, as the Charr will sometimes separate into smaller groups. Not all the Charr will come into the academy, so you will still have to go out and kill some groups. Once the Charr have been beaten, meet with Rurik and follow the mission as otherwise described. This method is potentially much faster but more difficult. It also bypasses the bonus, so you will have to fight your way backwards (in relation to the path above) through part of the mission to reach it and Rurik will press forward toward the end of the standard mission.

After you pass the wall and the cut scene, it is possible to complete the mission more quickly if you decide to go the opposite way (west, then south) that Prince Rurik goes (east, then south) to Stormcaller. You must defeat three groups of Charr and end the mission quickly before Rurik, alone, is overwhelmed.

The bonus is to carry the Tome of the Fallen from Watchman Pramas on east side of map to the pedastal on the west side, all north of the wall. The Bonus cannot realistically be finished once Rurik is released from the Academy.

You may commence the bonus before commencing the primary mission by exploring east (1 on the map) before opening the gate. There is a "green dot" there to find Pramas who will give you the bonus and drop the tome. Get a caster to pick this up and carry it (casters make the best carriers of items because they don't rely on melee attacks to do damage).

Continue south and head towards the wall. Go down the stairs, do not cross the gate, but continue all the way west instead. Keep left and pass west up the hill. Here it can get very nasty, especially if you have a bad group where folks rush ahead. If someone rushes ahead, you will get mobbed and the group will probably wipe. First, explore the area surrounding the Spirits of the Fallen carefully, as there are a lot of groups of hidden level 8 Devourers there. Devourers are hostile to spirits of the fallen, so a pop up group of devourers can aggro spirits of the fallen, which run around and attack. If this happens, run away and the spirits of the fallen will go kill the devourers. Once cleared, you have somewhere safe to take on the Spirits of the Fallen. The spirits of the fallen come in linked groups of three that move, and in pairs that do not move. Once they are dead, it is safe to get closer to the pedestal. Replace the tome on the pedestal, and talk to the ghost Old Ascalon Spirit (point 2 on the map). That will make the surviving spirits disappear and get you the bonus.

If you can, try heading up the left-hand entrance and sidle up against the wall there. Often it results in having to fight groups of only 2-3 at most.

Note: Placing the tome on the pedestal will not instantly make the ghosts disappear. Any that are already attacking your group will do so for long enough to cause serious trouble. So, make sure not to draw the attention of more ghosts when approaching the pedestal. Alternatively, have someone who has equipped a skill that allows faster movement (e.g., Sprint or Dodge) place the tome, and have them get out quickly once it's placed.

Note: Holy damage is very effective against the Spirits of the Fallen.

Note: A few pairs of the spirits will not move to attack you, even when in aggro range; they only attack if you are within melee range. Use this to your advantage and take them out with ranged attacks and spells. They will move if attacked by AoE spells but will then move back to their original location.

Note: The Devourer boss off in the Northeast corner by the cemetery can provide a recharge for Resurrection Signets. Be careful and try to lure him because several Carrion Devourers will appear when you attack.

Any mix of character types can be successful if they have a good healer. If having a lot of trouble, you can do the bonus separately from the mission with a team that has a lot of holy damage. For example, take a dervish with Avatar of Balthazar, or have other martial weapon users take a dervish secondary and Heart of Holy Flame. The undead are all Warriors and will lock on to a pulling Ranger; if the player then takes a step or two back the undead will bunch up making them obvious targets for Throw Dirt. AoE attacks (for example Searing Flames) can then dispatch the attackers with relative ease.

For the mission, someone in the group should have ranged attacks to eliminate Charr while you are above them on ledges. The doors to the academy usually do not open until all the Charr outside are dead, but occasionally they can open prematurely when the boss dies, and the remaining mobs can rush in. If you dawdle, they can kill Rurik, causing mission failure, but there is plenty of time to save him, as they have to go through some other NPCs first.

After cutscene 1, Prince Rurik will run off to the left. If you follow him, your party will easily make it to cutscene 2. Unfortunately, shortly after the cinematic, the prince will charge down the hill and likely aggro enough Charr to brutally wipe the party. If you have an efficient party, you can succeed by quickly and carefully killing the mobs at the bottom of the hill before Rurik gets there.

Alternatively, you can ignore him and run right: going west down a flight of stairs then south following the trail. Rurik will not take damage if your entire party is far enough away from him to avoid triggering mob attacks. Go kill Bonfaaz Burntfur, the end boss of the mission, before Rurik can get himself killed, and you win the mission. Consider running through this in regular mode, solo or with heroes/henchmen, to see exactly where you need to go after cutscene 1. This is by far the easiest and quickest method to completing the mission

Prince Rurik: The Charr archers have us pinned down. You'll need to sneak out the path to the east and ambush those Rangers. I'll stay here to help the mages hold the defenses. you must hurry. We can't hold out here for long.

Prince Rurik: We push on, to Rin! Bring the mages. Their homecoming is overdue.

Watchman Pramas: I took the Tome of the Fallen from the graveyard. The captain ordered me. But I didn't know it was cursed! Now the spirits of those who lost their lives on the Wall are roaming free! Please. Take it back to the graveyard for me.

Old Ascalon Spirit: These spirits are at peace because of you. They gave their lives protecting the Wall. The story of our destruction was foretold long ago. Our names might as well have been written in the Flameseeker Prophecies. Heed the words of the prophet. The sons of Ascalon must not die in vain.

Ascalon Watchman: Prince Rurik! What are you doing out here ?

Prince Rurik: Open this door! You will let us through!

Ascalon Watchman: But sir, the king swore death if the door was opened.

Prince Rurik: And I swear death if you don't stand aside this instant!

Prince Rurik: I defend Ascalon against another Charr invasion, and my father trifles with doors.

Ascalon Watchman: You'll speak to the king, won't you? You'll tell him I had no choice ?

Prince Rurik: By Balthazar's beard! Rin burns! I told the king the Charr would not be held for long. We must go to Horn Hill! Only Stormcaller can save the city now.

Prince Rurik: Praise be to Dwayna if this works.

Prince Rurik: I declare Charr pelt season officially open. One day, the city of Rin may fall. But not today. I would suffer a thousand deaths before I see these beasts defile the jewel of Ascalon.

Prince Rurik: Trumpets! The king must be near. The fall of Rin will have darkened his heart. Hail King Adelbern!

King Adelbern: Rise, my son. you have done well. The discovery of Stormcaller is surely a sign of victory.

Prince Rurik: It is a powerful weapon, but I fear not powerful enough. The Charr have amassed an army of many thousands.

King Adelbern: You overestimate these beasts, Rurik. Do not be afraid.

Prince Rurik: I am not afraid, father. I have seen them in battle. Rin has been destroyed! It would be wise to escape while we can. We should make for Kryta and rebuild our strength. Not wait here for death.

King Adelbern: I will never allow Ascalons to live in the shadow of the Krytans! It is Rin that will be rebuilt. And you will learn your place.

Prince Rurik: You have grown proud, Adelbern of Ascalon...proud and foolish!

Prince Rurik: People of Rin! Your king will lead you to death. If you wish to see better days, if you wish to live, then leave the beasts behind and follow me over the Shiverpeaks. We make for Kryta and a new life, free of the Charr.