Norrhart Domains is an Explorable area in the Far Shiverpeaks. The terrain is composed of open areas in the southeast and northwest, a complex system of cliffs in the southwest, a cave in the south, and many close passes. There isn't much of interest here. 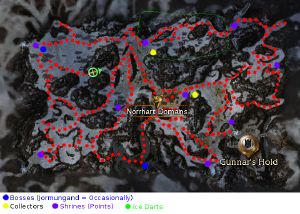