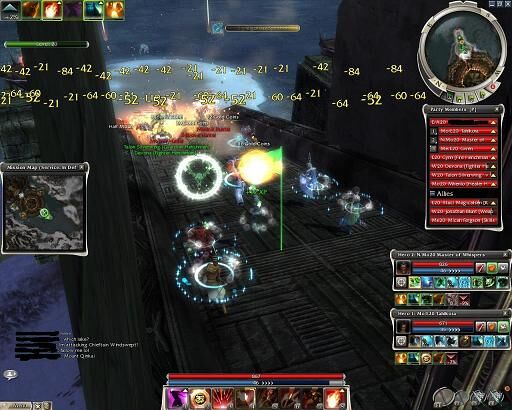 A common nuker's view, after some fire magic spells have been cast

Nuking is a term used in gaming for causing great amounts of damage to a number of enemies. This is normally done with using high-damage area of effect spells (like Meteor Shower) to take out a group of enemies at once. A player who Nukes is referred to as a Nuker. The term originates from the devastating real-life nuclear weapons. A nuke contrasts with a spike in that it focuses on dealing damage to multiple opponents instead of one.

Elementalists have access to a large and diverse array of such skills, so are usually favored to fulfill this role in a party. When asking for a Nuker, players almost always mean pyromancers who inflict highly damaging AoE spells such as Searing Flames and Meteor Shower. However, some Necromancer builds match the damage dealing potential of Elementalists, and are sometimes called Nukers, these builds take advantage of Spiteful Spirit, Reckless Haste, Desecrate Enchantments. Rangers using Barrage could also be considered as filling a nuker role, though are unlikely to be referred to as such in game. Ritualists are also potential nukers.

Nuking is very effective and common in PvE, since there are often many enemies and grouping them together is relatively easy. In PvP, however, players will rarely stand close together, especially once they know they are facing nukes. Thus, nukers are significantly less common, and mainly brought to force the enemy out of wards and wells, rather than to reliably deal damage to multiple enemies.