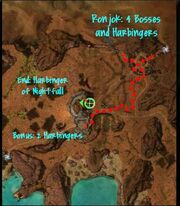 This is a mission entry. For information on the mission outpost Nundu Bay, see Nundu Bay (outpost).

Melonni must be in your party.

Defeat the Harbingers of Nightfall before they can destroy the village of Ronjok.

In this mission, the rewards are based on whether you defeat any of the additional Harbingers of Twilight.

Melonni has been having nightmares that her home village of Ronjok is under threat from Abaddon's forces. You return with Melonni to Ronjok to help her cleanse the demons from her dreams. The mission is first to defend the village against the Margonites and Harbingers of Twilight and then go on to defeat the Harbinger of Nightfall.

You start in the shattered remains of the village, and after some dialogue you will be told that the only way in which the Harbingers may take any damage is by hitting them with purified holy water. Speaking with Elder Jonah to receive the Vial of Purified Water, a skill which you equip, is the trigger for additional Margonite forces to spawn and begin attacking the village. If you delay equipping the skill, you can use this time to clear some of the closer Margonite groups to ensure that you only have to fight the attacking groups after you accept the holy water.

Tip: Because Vial of Purified Water is a Hex Spell, you can copy it with Arcane Echo so you won't have to wait for the skill to recharge.

The village has three entrances radiating out from a central well, near which Jonah and several Istani Peasants will stay. The peasants are useful allies, so it can help to keep them alive, though this isn't essential. The death of Elder Jonah will cause mission failure.

There are several waves of Margonites, starting at groups of two, increasing to groups of six which approach the village attacking through alternating entrances. The last group of the first wave will be led by the Monk boss Priest Zein Zuu. When he has been defeated, a Harbinger of Twilight will spawn. From close range use the vial of holy water against it to ensure you're doing damage and dispatch it. After that, two groups will attack, one led by a very powerful Elementalist boss named Scribe Wensal, and another led by a Paragon boss named Commander Chutal. Another Harbinger of Twilight will spawn next, and finally a group led by Zealot Sheoli. Once he is defeated you are free to travel out of the village to the old Kournan fort.

When the Harbinger of Nightfall drops to 50% health, eight additional Margonites will spawn, three from the east and five from the west. These will all come join the Harbinger in attacking you. The easiest way to handle this is, once you see the boss get below half life, run away to the east, along the path back to the Ronjok. Do not wait until you see the incoming Margonites, let alone until they reach you. The boss will not chase you very far, and you should be long gone before the Margonites from the west would come within aggro range. Intercept and kill the three incoming Margonites, then return to the boss and pull away the five Margonites that came from the west. Once they are dead, you can resume fighting the boss.

Note: It is possible to clear out all of the existing Margonites in front of Ronjok and those where the Harbinger spawns before any of the waves begin attacking by not speaking to Elder Jonah and accepting his vials. Just wait for the dialog between Jonah and Melonni to finish, and the gates surrounding the town will burst open, allowing you to leave and kill any Margonites you wish, with no penalties. However, the final Harbinger will not spawn in his normal location, so you must go back to the starting point to accept the vial and do the remainder of the mission the normal way. Finally, although the bonus Harbingers will appear, they will be invincible, as no player will have the Vial skill.

To do the bonus, go south out of the ravine and kill the several Margonite groups on the way to the first Harbinger. From the southern path into the fort, you can pull both the Margonites and the Harbingers outside. This fight will be a bit difficult as the Harbinger will attack with the Margonites.

Note that the terrain is rather awkward, so henchmen and heroes will sometimes just shoot walls instead of doing damage. Flag your party a little over an aggro bubble away from the door to the fort, and pull the first extra group out of the fort entirely. Occasionally you may accidentally pull the second group, too, in which case, run away and the first group will follow you farther. Once the first group is dead, flag your party in the middle of the fort, as far north as you can go, and pull the group to there. This will bring all of the mobs up the stairs and out of the way of the obstructions.

Clear some Margonites near the village before initiating the siege. When pulling groups before the siege, if you accidentally pull two groups at once, you can run back into the village and get help. This is especially easy to do if pulling southwest of the village, as there are two Margonite groups with overlapping spawn areas there.

Melonni: Elder Jonah! I saw it happen in my dreams. The ground erupted, and everyone was dying. I didn't want to believe it, but I had to come and see for myself.

Elder Jonah: Calm yourself, child. All is not lost. It's good that you have come. I do not think I can save Ronjok by myself.

Elder Jonah: I have purified the village well of all corruption. Here, take these vials of water drawn from the well. The creatures leading this attack are weakened when hit by the vials.

Melonni: I think I understand. We use these vials to weaken the creatures attacking our village. Once we do so, we can destroy them?

Elder Jonah: Exactly. I've enchanted them. When a vial is thrown it will shower the creature with purified water. A weakened Harbinger will be vulnerable to attack for a short amount of time, so you must fight swiftly! Coordinate your attacks!

Melonni: It's a slim chance, but at least it's a chance. There isn't much time. Elder, let us have some of your vials and we shall take care of these abominations.

Elder Jonah: You were always a brave child. Here, take these. Watch yourself, here come the fiends!

Harbinger of Twilight: The fact that you've lasted this long is impressive. Torturing you to death will be a delight!

Elder Jonah: Here comes the demon! Remember to use the vials or our attacks will have no effect!

Harbinger of Twilight: You got lucky once, but you won't get lucky again!

Elder Jonah: It's all in the reflexes. Be on guard! Another Harbinger is coming!

Harbinger of Nightfall: You may have stopped those weaklings, but you cannot stop Nightfall!

Elder Jonah: Do not listen to them! We will be victorious! Go to the rupture at the garrison. That is where the attack started, and that will be where we end this!

Harbinger of Nightfall: Yes, weak mortals. Come to me. You will provide precious amusement, and your death will herald a beginning to Nightfall.

<party leader>: You were right.

Melonni: I was right. Would that I had been wrong.

<party leader>: How are you feeling?

Melonni: Better. It was like some dark weight was in my mind, crushing the hope out of me.

<party leader>: It may be tied to the eruptions.

Melonni: My heart says it is. Sometimes you have to trust your heart.

<party leader>: I understand. I think Koss understands that as well.

<party leader>: Agreed. But sometimes you have to trust your heart.

Melonni: I suppose you're right. You think we should talk, him and I?

<party leader>: Yes. And you will, when the time is right.

Melonni: For my sake, I hope that time is soon.

Margonite Reaper: Mistress? Is something wrong?

Prophet Varesh: The Ruptures. They have stopped.

Margonite Reaper: It matters not. When you free our lord, the Torment will wash over the world, transforming it.

Prophet Varesh: You are right. I can feel Abaddon's presence, like a weight in my mind. It is nearly overwhelming.

Margonite Reaper: Abaddon depends upon you. Would you hesitate now?

Prophet Varesh: No. No. Abaddon's will be done.

Margonite Reaper: It is, Mistress. And your reward is coming, when you weaken the last barriers. Hail Abaddon!