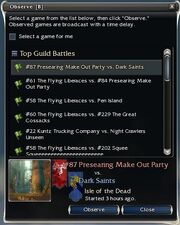 Observer Mode allows players of all levels, and locations (post-searing), to watch PvP matches amongst the top 100 ranked guilds and all Hall of Heroes matches. As of the Guild Wars World Championship, championship matches of the concluded PvP season are also available for viewing. Matches that are currently underway are delayed by fifteen minutes to prevent cheating. By observing matches, players are able to study winning strategies employed by the top ranked guilds.

Observer Mode can be accessed while not in an explorable area or mission by pressing the appropriate hotkey. The default hotkey is 'B'.

Observer Mode has been enhanced with the release of Nightfall. A new feature means that you can watch recent GvG battles by your guild [1] 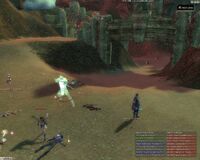 A Screenshot of a Heroes' Ascent match viewed in Observer Mode

Now you can watch as top-ranked guilds battle it out in the Tombs and in rated guild matches. The upcoming Guild Wars Regional Playoffs and World Championship will also be available for viewing as they happen. The details are as follows: