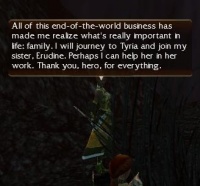 Odurra talks about visiting her sister in Throne of Secrets

Odurra is a Domination Magic henchman available in the Nightfall Campaign. Odurra and her sister, Erudine, are both of Vabbi. Her sister is currently visiting Ascalon.

Note: Found in all towns and outposts of the following regions unless noted otherwise

"Hello, dear! Isn't it a magnificent day? The kind of day we used to have in Vabbi. My sister and I spent years at the theatre and the library, educating ourselves. But I traveled to Istan, and she went to Tyria. I haven't seen her since. But I'm sure she's safe. Safer than us, I'd imagine, darling!" [sic]

In the Throne of Secrets, as an NPC:

"There you are! A brilliant hero and still looking fabulous."