This dungeon is accessible from Grothmar Wardowns. The quest Watch it Jiggle from Seer Fiercereign (outside of Doomlore Shrine next to the devourer) is necessary to unlock the first door. The dungeon consists of one level, filled with mostly Ooze and several spawns of Incubi. Additionally, there are stone boulders circling certain paths near the boss key and boss area. The final chest rewards you with a random gold item, an Onyx Gemstone or a Diamond and Prismatic Gelatinous Material. 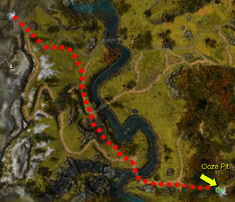