Outcasts in the Quarry

"As if the potential thread of Kurzick attack was not a daily concern, we now find ourselves under attack by the Luxon Outcasts! They are reavers who dug too deeply into the Jade Sea, and have gone mad. Now they tear our men apart and take the jade themselves. It is all we can do to keep them at bay, and while we do that, no mining is getting done at all. I just hired some others, they are on their way, but I am sure they could use your help. Speak with my father, Great Reaver Rixor of the Crab Clan, if you wish to aid us. You will find him in Seafarer's rest. The Luxon Outcasts must be stopped!"

Accept: "Violent, crazy Luxons? Sounds like my kind of fight!"
Reject: "You really need to work on your sales pitch. Ask someone else."

"Ah! It looks like my otherwise worthless son has found another hire! I hope you brought your luck with you... these Outcasts are growing more destructive by the minute. They cannot possibly kill us all, they fight like animals and know nothing of strategy or tactics... but they aren't letting us work! Rion is overseeing our countermeasures. Speak to him, and by Balthazar's blade, end this soon, <name>. We need to mine that jade!"

"These Outcasts just won't stop coming at us, it's like there's an unlimited supply! Rixor told us this was going to be an easy job.... we planned for an easy job... but no one ever sticks to the plan, eh? Well, now that you're here we can put a stop to this. Let's take the fight to them!"

"As the Luxon proverb goes, "A strong offense is the strongest defense." You are strong indeed, <name>. The Crab Clan is in your debt."

Start from Seafarer's Rest. Rion and his group (Khim, Hannai, and Ting) will be just outside. Talk to him to get them to follow your group. Be wary of the Afflicted mob that is very close to Rion. You might want to destroy that small group first. As a side note, throughout this quest, try to keep Rion and his group alive (although it's not required), as they will make things easier.

Head for your first group of Outcast by clearing out the nearest two groups of Rockhide Dragons and Leviathan Mouths. Be careful that you do not aggro both groups. Having interrupts would really help against their spells. If you are bringing henchmen, bring Daeman. After clearing them out, just follow the path to higher ground and your first Outcast group. 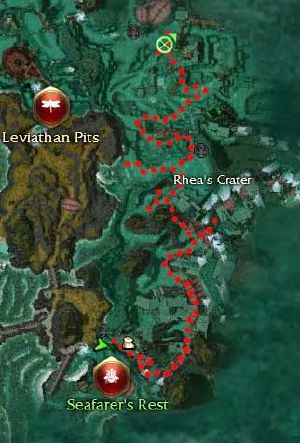 When clearing Outcasts, always pay attention to their patrols. They will always have patrols of 3 or 4 Outcasts running very fast (due to the "Charge!" from the Outcast Warriors). Take some time to study the patrol patterns before attacking a big group.

After that first group, head towards the second, where you have to traverse a windy path to reach a high plateau. On the way, you will most likely encounter the warrior boss Razorfin Fleshrend. Take this group out, but try not to aggro the Rockhide Dragons that are also nearby. The third group of Outcasts is close to the second group. Again, take note of Outcast patrol patterns and be wary of patrols charging in while you're taking out a big group.

The fourth group of Outcasts is a bit further off and requires a little backtracking, but it should be easy to follow. Just stick to the general direction of it. Along the way to this fourth group, you will likely encounter the assassin boss Arius, Dark Apostle. Near this group is a patrol of Outcasts.

The last group is not too far; crossing the bridge will trigger an ambush of Oni, so be prepared for it, or go around. Very near this last group is Incetol, Devout of Depths. This monk boss and his group is standing right next to the last group of Outcasts. Aggroing both groups is not a good idea as the boss has Healing Burst which can make things difficult. But as long as your group does not charge straight in but let the Outcasts come to you, then it will be fine. It is not necessary to take out the boss group to complete the quest.

Alternative: If you're having trouble with this quest, consider starting from Leviathan Pits and heading into Rhea's Crater. Or you can choose to start from the Aurios Mines. But be warned that these two alternatives will take much longer to complete. These also require that you know where the Outcast groups will spawn, and as such can proceed to both clear the way and take out boss mobs to gain morale boosts.