Passage Through The Dark River 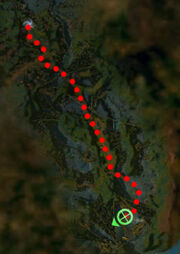 Shadow in Henge of Denravi

"Contained in this message are your orders from Evennia. Take it to Derrikk Deathblade in Riverside Province. It is of the utmost importance that you shield it from all eyes, especially those of the White Mantle. If they learn of your plans, all is lost.

Speak to Old Joness the river guide in Tangle Root. Speak to him of his son, who was killed by the White Mantle. And give him my name. He'll take you as far as he can. Follow Carlotta, my spider. She knows the way."

"Thank Balthazar. You have done a great deed in delivering this message. The White Mantle underestimate the power of many people working together toward a common cause. We shall overcome."

If you have an Elementalist in your group who uses AoE spells make sure he doesn't accidentally hit Carlotta because she will take damage from those attacks (and given her low level she doesn't have a lot of Health). It is a good idea to give Carlotta a decent head start and just follow her Marking Webs. Mobs will not attack her. You can of course just ignore the little spider and find the way on your own, too.

When crossing the last tree bridge, nearing Old Joness, you may see two or three groups of Jungle Troll, patrolling the area. If you wait for them to pass, you will not have to fight them, making it easier to take on the remaining trolls.

Although Maguuma Stade is a shorter distance to Old Joness, caution should be used when starting this quest from there, as the nearest Resurrection Shrine is near Henge of Denravi. A dead party will be resurrected at that shrine, adding more time to the quest and more mobs to fight.