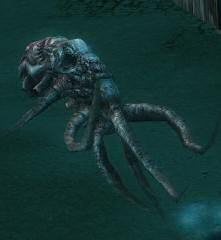 Phantoms are a type of monster typically encountered in the later zones of the PvE aspect of Prophecies. They are typically mesmers.

They have a slightly higher movement rate and can sometimes run past traps unless you can stop or slow down their movement for a second for the trap to trigger. They also sometimes spawn without warning from out of nothingness. They are immune to flesh effects, like bleeding for example.

The underworld versions (Grasping Darkness) are sometimes called squidies in slang terms on many of the online forums and are part of a collective farm run there. The phantoms here are warriors.

For a list of Phantoms in the game, see Category:Phantoms