The Plains of Jarin are a moderately-sized area located on Istan. It consists primarily of desert, though rolling green hills to the south and a lake to the north also exist. A river flows through here, which is surrounded by trees and lots of other foliage.

Note: All of the following quests, except Student Jin and Student Sousuke, are only available to Nightfall characters. 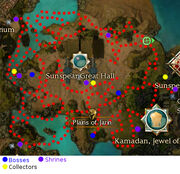 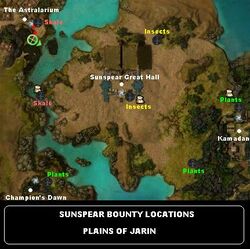 The Sunspear bounties available in Plains of Jarin and which shrines they are offered at are listed in the following table; refer to the map at right for the exact locations of the shrines. In Normal Mode, they are only available to characters whose level and Sunspear rank are equal to or less than those noted in the table. All bounties are available to all characters in Hard Mode.