From GuildWiki
(Redirected from Pogahn Passage)
Jump to: navigation, search 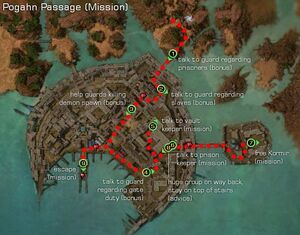 Speak with Jack of Truths with Margrid the Sly in your party to enter this mission.

If your character chose to follow Master of Whispers (after the primary quest Mysterious Message) and has not yet gained Margrid, you can still enter this mission by partying with another player who can bring her. You don't need to finish Master of Whispers' side of the storyline by completing the Rilohn Refuge mission.

You start out in a Kournan Guardsman disguise and none of the Kournans are hostile. The "U" map shows mission flags which are the locations of mission and optional objectives.

Go to the vault (location #5 on the map) to initiate a dialogue that results in the Kournans giving you the gem that Margrid is after (there is no actual gem in your inventory).

Next you open the gate to the prison island (location #6) by talking to Prison Keeper Shelkesh. If you got the code from Kahturin (location #1, see Bonus below) and answer the password question correctly, he'll open the gate without a fight. If you did not get the gate code or if somehow you manage to answer his gate code question wrong, then he'll turn hostile, summon hostile guards that spawn, and the gate will open when he dies.

Next, free Kormir and Shahai the Cunning by defeating all the Kournans on the small island of Kormir's prison (location #7). When the last Kournan dies there is a cut scene where you learn about Kormir's condition and about Shahai, they are released, and you lose your disguise.

Once you rescue Kormir, a timer will start and all the Kournan's become hostile. You then have 15 minutes to fight your way to the end of the pier at the southwest area of the fortress (location #9), which is about double the amount of time you should need. Reach the end of the pier with Kormir and Shahai to complete the mission.

After clearing one group of Kournans after the cut scene (at the end of the long island bridge), approach the next (area #8) group staying off the stairs, but do not attack it. Another large group from further back will then run up. Back off well away from the stairs and fight the latter group by itself first, before clearing the former group.

There are many small groups of mobs in the remainder of the mission, often not linked to each other where one might expect that they would be. In particular, if you pull Guard Linko's group, you can clear it before fighting Colonel Kajo's, even though the latter will move up to Linko's spawn point when you aggro Linko.

There are many obstacles in the area, which can block a lot of attacks. Such obstacles will block Nebo's devastating Fireball, but will have no effect on his Meteor.

The bonus is trivial. Three of the four bonuses for this mission simply involve talking to someone along your route; the 4th involves the simple dispatch of a demon likewise along your route. All the bonus objectives must be accomplished before you free Kormir since the entire city becomes hostile and nobody will talk to you.

At Location #1, obtain the prison code at the entrance of the fortress by talking to Guard Captain Kahturin. The password is 20 - 1 - 8 - 7. When the prison gate keeper Shelkesh (location 6) asks you to tell him the password, simply choose the correct answer to enter.

At location #2, talk to Captain Nahnkos and accept the charge of 3 Sunspear Prisoners, the bonus is complete when one of them gets to the prison. They become party window Allies and follow the leader for the remainder of the mission. Although one of the three is all you need to complete this bonus, you may wish to go back for any that get stuck, as they will fight with you as allies after the cutscene.

At location #3, help the guards kill the Demon Spawn.

At location #4, talk to Guard Linko in the south-southeast corner of the fortress. He complains about guard duty and you accept his request to take over his shift for him, no problem. You then continue. The displayed objective "Take over gate duty of some of the guards." is misleading, that objective is already done.

None of your NPC allies are very durable. Mobs will usually target Sunspear Prisoners before Kormir or Shahai the Cunning, and Kormir and Shahai are the only ones you need to keep alive. When trying to pull mobs, it helps immensely to be able to pull from flatbow range, so that your NPC allies won't get too close to mobs and then be unable to run away. This can also keep them from running up to mobs that aggro and thus grabbing an additional group.

If necessary, you can sometimes just run by Nebo's group, get Kormir and Shahai to follow, and trigger the cutscene to complete the mission as your party is in the process of wiping. Depending on how many mobs that spawn on the pier are already dead, this runs a substantial risk of either Kormir or Shahai getting body blocked and promptly dying, but offers a satisfactory chance of succeeding if you are about to run out of time.

Margrid the Sly: Remember our deal, Sunspears. First we grab the Diadem of Lady Glaive. Then we rescue your precious Kormir.

Margrid the Sly: The last I knew, the Kournans stored the Diadem in the vault, which is heavily guarded. I'll handle the guards when we get there. You just keep quiet and we'll be fine.

Margrid the Sly: Keep your eyes open for anything that might help cover our escape while we're in the fortress. Once we break Kormir out we'll need every advantage we can get to escape from this rock.


Margrid the Sly: You there! General Bayel sent me for the Diadem of Lady Glaive! You'd better get it quick...before he sends one of his pet demons instead.

Vault Master Eijah: General Bayel sent you? It must be for that ambush he's setting up. Here is the Diadem. Make sure it doesn't fall into enemy hands!

Margrid the Sly: The general will be most pleased with your quick response. We'll be sure to keep the Diadem from falling into the...wrong...hands.

Margrid the Sly: The stories about Bayel must be closer to the truth than I thought if that little ruse worked so well. Let's get out of here before they get suspicious.


Jailer Gahanni: Your time is almost up, Kormir. The executioner is on his way here to take care of you and your friend.

Margrid the Sly: Looks like we're just in time. Lets [sic] move in before we're too late!


Margrid the Sly: Let's get out of here! We have boats waiting by the dock. We just need to get to them....

Shahai the Cunning: Sister! You've come to rescue me!

Margrid the Sly: Shahai! Um, of course! You think I would leave my sister to the Kournans?

Kormir: Give me a moment. Night has fallen. At least for me.

Kormir: Our hosts were... less than gracious.

Shahai the Cunning: Varesh's demons blinded her. They have a taste for eyes.

Kormir: I can manage. You lead. I shall follow.

Margrid the Sly: Let's ditch these outfits. Now that we've sprung the prisoners, this place is going to be crawling with soldiers!

<party leader>: Kormir, we're going to get you back to Istan.

Kormir: Istan? No, you need to go north, to Vabbi.

<party leader>: There's no way to get past the fortress of Jahai.

Kormir: There is another way. There is a passage at the back of the Waterworks of Mahnkelon.

Margrid the Sly: You told her about that?

Shahai the Cunning: So I took a risk.

Kormir: The passage leads to an old smuggler's cave. The cave will lead to Vabbi.

Margrid the Sly: And I can take you to the passage, but we'll have to be quick about it!

Margrid the Sly: Very quick about it!

Bayel: What is your problem, hound?!

The Hunger: A prisoner has escaped. The one touched by Abaddon.

The Hunger: All in good time, mortal.

Bayel: What are you waiting for?!

The Hunger: You misunderstand, little mortal. You are not my master.

Bayel: You are charged to help me hunt these Sunspears. You will do as I say.

The Hunger: I answer to my lord Abaddon. I answer to Warmarshal Varesh. I do not answer to you. Are we clear?

Bayel: I am Varesh's general. You should respect...

The Hunger: Varesh does not need generals anymore. She needs us. Do not make her choose.

The Hunger: We are partners, at best, until all your Sunspears are slain.

The Hunger: Then? We will renegotiate. I know where these Sunspears are going. Follow me.