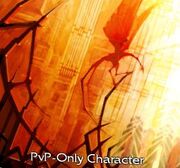 In order to chose a profession, you must select a campaign. Assassins and Ritualists must be created as Factions characters. Dervishes and Paragons are Nightfall classes. The six core classes can be selected from any campaign but just like roleplaying characters, the campaign affects your choices of the character's appearance. However, there is no other difference between campaigns in the creation of a PvP character.

When you make a PvP character for the first time, you will start out in the Isle of the Nameless, where you are required to follow the quests from The Guide. You must enter the portal to the Great Temple of Balthazar for it to appear on your map. From there you can begin. However, you can reach any unlocked location in The Battle Isles by using the World Map.

After you've named your character and arrived on The Battle Isles, press K to open up the Skills/Attributes window and choose your Secondary Profession from the list at the top.

PvP Characters start with 6 Core Skills from your primary profession (except with professions exclusive to Factions and Nightfall), regardless of whether you've unlocked them or not. You can choose from all the skills that you have unlocked with either your Roleplay characters or by handing in Balthazar Faction to a Priest of Balthazar.

By pressing J you can open the PvP Equipment window and choose your weapon(s), armor and runes. You can also access your PvP equipment window by pressing "I" to open your inventory and then clicking on PvP equipment. You can create more than one weapon by selecting an empty Weapon Slot and then creating another weapon or by unchecking the equip immediately option. Weapons are all placed in your inventory.

To gain a pet for a PvP character you don't need to charm it. By equipping the skill Charm Animal your character will automatically gain a level 20 pet. This pet is an Elder Wolf. It can be changed in the Zaishen Menagerie to any other pet you have unlocked. Like all pets this pet can be named. You can only change the pet's name in any outpost but not once you go into battle.