A quest is a task assigned to you by an NPC for a reward. Quests have no impact on the overarching storyline; however, through the dynamic quest system, quests can affect other quests and explorable areas, as well as add depth to the world of Guild Wars.

An NPC with a quest to give will have a large, green exclamation mark (!) over his or her head. Speaking with that NPC will allow you to read the quest and choose whether to accept or decline it. Accepting the quest will add it to your Quest Log. Declining the quest (or abandoning it later via your Log) brooks no penalty: you can always reacquire the quest by speaking with the NPC again. 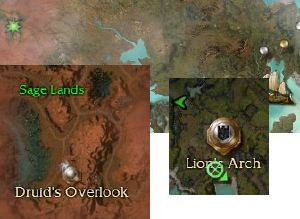 Finding where the quest actually takes place can be viewed on the world map. The active quest will annotate the world map with a few key features:

Each Campaign of Guild Wars has its own set of quests available:

The Realms of the Gods and the Battle Isles have quests which are available from every Campaign:

On special occasions quests are introduced for a short period of time only:

Some quests are marked in-game as primary quests. There are no other official categories for normal quests besides quests given in a certain region (festival event quests have their own category). However, there are many commonly understood categories of quest.

Primary quests are clearly identified by their own category at the top of your Quest Log, if you are currently undertaking at least one.

Skill Quests include any quest which gives you a skill or skills as part of the reward. These quests are the most popular to do, the reason being that skills that are taught through these quests become available at trainers but at a later point in the game. So, they provide a fast and free (no gold, no Skill Points) way to obtain some skills.

For example, Captain Osric the skill trainer in the Northern Shiverpeaks, offers many skills, but almost all of them are available previously through quests in Ascalon.

Many skills are only available through Skill Trainers or Signet of Capture.

All skill quests in the Factions campaign are available only to Canthan native characters.

All Profession-Specific Quests are Skill Quests.

Attribute quests grant you extra attribute points to use. These quests increase your power in a very direct way. Every player should seek these out and complete them.

There are 2 Attribute Quests in each campaign, giving you 15 attribute points each:

If you have an account that combines multiple campaigns, it is not possible to do additional attribute quests, since that would result in having over 200 attribute points and an unbalanced advantage. Skipping the attribute quests from your character's "native" territory will not allow you to complete them in foreign lands.

A travel quest allows a character to travel between continents by doing a quest available in a port city. This way, the character can enter another campaign on the player's account.

Repeatable quests are quests that can be taken again after they have been completed. Normally, when a quest is completed, it cannot be taken again. Speaking with the quest giver will not provide any way of taking it. Still, there are a small sub-set of quests, usually in high-experience explorable areas of the game that are repeatable. These quests recharge every time a player enters the area.

While main story Missions are repeatable in that they can be done more than once, you get the XP reward only for first time you complete the mission/bonus. Repeatable Quests give you the XP reward repeatedly, every time you complete the quest. In the Factions campaign, some repeatable quests also offer Kurzick or Luxon Faction as a reward, and repeating these quests contributes greatly to a players unspent faction total. These repeatable quests also allow faction farming and fast faction farming.

In Eye of the North, most primary quests and quests involved in dungeons are repeatable. Most of these quests can be used to farm reputation points with Hero's Handbooks or Master Dungeon Guides.

Note: Unlike regular quests, most repeatable quests are cleared from the Quest Log when the player leaves the area in which the quest is given. Any tasks completed (crossed out) in the quest log will be undone. The next time you enter the area you will have to start the quest over. The only confirmed exceptions are the Mallyx the Unyielding quest and the Wintersday 2006 quests In Grenth's Defense and You're a Mean One, Mr. Grenth, which are not cleared from the quest log when you change zones.

Quests that are labelled as 'Master' difficulty are particularly difficult. They require an extra amount of teamwork or understanding of builds. The monsters in them are also usually more powerful than the standard monsters of the region. In Eye of the North the first Elite quest is available during the elite dungeon Slavers' Exile.

During most special events (such as the Wintersday), a number of new quests become available to players. These quests are designed in the spirit of the specific event and serve both to tell little background stories related to the occasion and to give players new things to do and earn collectibles or fun items related to the festival. These temporary quests almost always need to be completed before the event concludes. Even though the unfinished quests are not removed from the quest log when the event is finished, the monsters or NPCs involved will not be available to advance the quests or claim the rewards.

A Solo Quest separates you from your party, i.e. you have to beat the quest on your own.

Note: Some non-solo quests require you to carry out the tasks yourself, whereas in other quests (e.g. Troubled Lands) it is sufficient that one person in the party does them, or that you do them together. At least two quests cannot be completed alone: Across the Wall and Adventure with an Ally. The interaction with Gwen that nets you the Tapestry Shred can be spoilt by entering the explorable with an ally who has already got it.

A hero quest makes a hero available for your PvE character's party and also unlocks it for PvP. Most hero quests are primary quests as well. Heroes are only available to people who own Nightfall or Eye of the North.

Dungeon quests are found in the Eye of the North expansion.

Quests that do not fall into any of these categories are just called quests. They generally reward you with some experience and some gold, they often advance you in a rank and sometimes have items as reward, though the exact mixture of these three rewards vary depending on the quest.

Quest rewards may be one or more of the following:

During a quest the player may be able to fight monsters and bosses that cannot otherwise be encountered, or not encountered in that location.

Note however, that Weapons, Shields and Focus Items that come as quest rewards, are different from regular items in the following sense:

First introduced in the Factions campaign, the Collectable quest items are special rewards that can be traded for various other items like Identification or Salvage Kits, Scrolls or even some rare crafting materials.

A handful of Prophecies quest rewards are considerably more valuable than their merchant value, making it a good idea to keep them for either use or trade. See the Notes section on the following quests for more details.

Abandoning a quest is simple: in any town or outpost, select the quest in your Quest Log and click the Abandon button. For most quests, there's no penalty to abandoning the quest: you can accept and abandon as often as you like. However, some quests are only available under specific conditions, so be sure that you can easily obtain the quest again before abandoning it.

There are three main reasons for abandoning a quest: