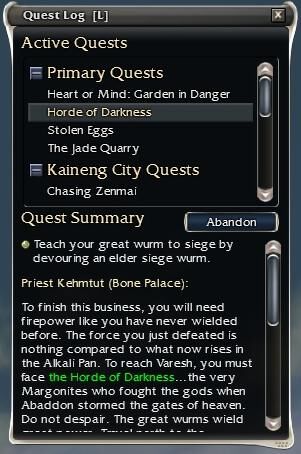 A log that can be accessed by pressing the default key "L." The log is useful in keeping track of the quests that have been taken, the tasks necessary to finish them and completed quests with unclaimed rewards. When doing a mission, objectives will also appear in the quest log. These objectives will only be there while in the mission.

Quests are grouped by region. To find a quest, click on the region it was given in. Use the Quests page to find out which region has which quests.

Highlighting a quest in the Log (clicking on it), will make it the active quest. The details of that quest will be displayed below and, if in an area near where the quest's next task can be done, the Compass will point an arrow in the proper direction. A star will appear on the map and the mini-map as to the final destination as well. If the quest's target destination is in a different explorable area, the arrow will point the way to the objective point, even leading the player through area boundaries. Once a task is completed, it will be crossed out in the log and the next task will be listed. In addition the marker on the map will point to the new task destination.

The Log also provides a button to Abandon the selected quest. This will remove the quest from the log entirely, and allow for the player to re-take the quest from the original quest-giver. However, abandoning a quest can only be done in an outpost or city. Quests marked as "Completed" can still be abandoned as long as the reward has not been claimed.

Note: The quests listed under "Primary Quests" are important parts of the game's plot and will usually lead to the next mission.

Tip: When you enter an explorable area for which many quests have been taken (such as Old Ascalon), all the monsters, items and characters necessary for all those quests (not just the active quest) will be spawned in the area. This may sometimes cause complications a party approaching one monster to complete a quest and another group of monsters attack an NPC necessary for another nearby quest. Should that happen, simply leave the area and come back and the creatures and items for the quests in which progress has not been made will be respawned.

1 Only appears while in a mission, with a single entry named "Mission Objectives."