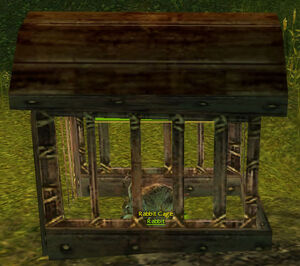 A caged rabbit in Sunqua Vale. 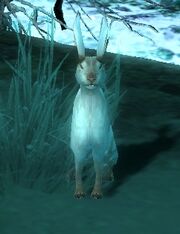 A white rabbit in Drakkar Lake.

Where to find the rabbit, starting from Ashford Abbey 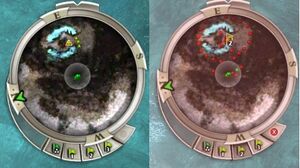 Screenshots taken in Drakkar Lake area, before and after following the rabbit.

A Rabbit can be found on a rise above Ashford Village in Lakeside County. Unlike other creatures, the rabbit appears on the radar as a green dot like an NPC. Currently, the rabbit does not seem to be incorporated into any in-game mechanics.

The rabbit cannot be tamed by rangers using Charm Animal or killed. Thus, contrary to dictionary definition and intuition, rabbits are not considered animals as per the game definition. AoE spells don't seem to have any effect.

There are also three rabbits involved in the Factions quest Free the Fur.

You can heal or enchant the rabbit, but it is not necessary.

There are white rabbits in Eye of the North, which also cannot be tamed by rangers. There are some rabbits in Grothmar Wardowns and Drakkar Lake, however, unlike other rabbits, the ones found near Drakkar Lake can both turn hostile and be killed. On the south-eastern side of Drakkar Lake, there are 3 other rabbits, and following these will get you to an ambush of Spectral Vaettir once you reach the bottom. If you are going to fight them, it is recommended to prepare before they pop up.

You get a small warning about this when speaking to Sif Shadowhunter, who, upon opening a dialog says "I am Sif, great hunter of the north, slayer of ten dozen wolves, threescore bear, and one vicious rabbit." Obviously, you are not the first to follow the white rabbit into a trap.

The rabbit also appears as a random summon from a Mysterious Summoning Stone. The attack animation is reminiscent of Monty Python and the Holy Grail, as the rabbit jumps up to neck level and bites (probably a reference to the scene where the killer rabbit decapitates a knight). The rabbit is an Assassin and uses the following skills: