From GuildWiki
(Redirected from Rank)
Jump to: navigation, search 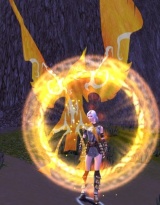 Hero is a title that players can display for prestige and which grants them an in-game benefit.

It is awarded per account for PvP achievements in Heroes' Ascent. Every victory in the Heroes' Ascent adds fame to your title's progress. Each consecutive win increases the amount of fame gained.

For each third rank in the title track players are rewarded a special emote. It can be used using the commands /fame and /rank.

1 The deer emote is frequently referred to as "Bambi".
2 Charr in Eye of the North display a Tiger emote when they use the skill Gloat.

For each victory in the Heroes' Ascent players gain fame. The first victory grants one fame, however this gain increases with every consecutive win.

For each rank in the Hero title a player's cap for unspent Balthazar Faction will increase. The first five ranks each add up 2,000 to the cap while all other ranks add 5,000 each, thus giving an additional cap of up to 60,000 faction.

When PUGing players may advertise the desired rank of the player they need with the letter r followed by a number, for example "r5+" if they only want players with a rank of 5 or above in their team.