"I should have known never to trust you humans! The Celestial Ministry is planning to demolish our community, known as "The Roost," in favor of a refugee camp. This parcel was granted to us during the peace talks that ended the Tengu Wars. Surely, the Emperor is unaware of this decision. As a Tengu, I have very little influence to stop this, but perhaps you can help. Would you speak to Junior Minister Jejiang on our behalf?"

Accept: "I will do what I can to help you."
Reject: "Maybe another time."
When asked about quest: "Have you spoken to Junior Minister Jejiang? I fear there is not much time left before they begin the demolition.

"This was granted to the Tengu after the war, eh? I suppose it would not be fair to take it away from them. I will consult with my superiors and see if there is another suitable location for the refugee camp... for the right price, of course. Two platinum should just about do it, do you not agree?"

Intermediate Dialogue 2 (if not have enough money)

"You seem to be a bit short on gold, <name>. Come back when you have more to dedicate to the cause than courage."

Intermediate Dialogue 2 (when you have enough money)

"You are about to give 2 platinum to Junior Minister Jejian, is this okay?"

"Ah-ha! Why did I not think of this before? There is a perfect spot for a refugee camp down by the docks that we can use instead of this place. Inform the Tengu that we are moving on. Now that my work is done, I think a trip to the Marketplace is in order..."

"Thank you. I feared that this situation, if unresolved, would have erupted in civil disobedience. With the plague afflicting the city, that would be the last thing the public needs. My people can be stubborn at times, so I thank you on their behalf."

This quest is easiest coming out of Senji's Corner. Head Northeast, fighting the Jade Brotherhood patrols, until you reach the Tengu encampment. Talk to Quill Songfeather then head back exactly the way you came, as there will be no more enemies along that route. Speak with Junior Minister Jejiang near the entrance of Senji's Corner. He will ask for 2 platinum. 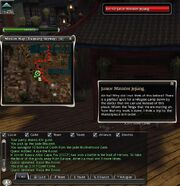 The exploit being performed

If you are short on cash, an exploit is luckily available that allows a player to complete this quest without paying anything. Make sure you have at least 2 platinum and open your inventory before talking to Junior Minister Jejiang. When Junior Minister Jejiang asks for the 2 platinum, wait until you have the option giving you an "Accept" or "Reject" to hand over the bribe. Drop your remaining money onto the ground, then select "Accept." When the quest updates, pick up said dropped money and continue as normal.

Note: This exploit would be best used with a party of henchmen or trusted friends/teammates, to prevent a dishonest player from pilfering your money when it is on the ground.

Either way, once you're done chatting with the Junior Minister, backtrack to the Tengu encampment. Speak with Quill Songfeather again, and receive your hard-earned (or not) reward.