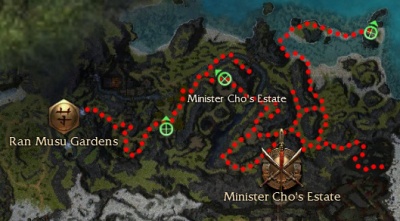 Locations of the survivors.

Several people have vanished from the estate that once belonged to Minister Cho. I'm not sure what would have driven them to go there: that area is considered to be little more than a lost cause. It was one of the first outbreaks of the Afflicted plague and has carried a heavy stigma because of it. Regardless of what caused their actions, we cannot abandon them to their consequences.
Will you join me in searching Minister Cho's Estate for survivors?

Accept: "There's no time to waste. Let's go."
Reject: "We're probably already too late."
When asked about quest: Time is of the essence. We need to head to Minister Cho's Estate as soon as possible.

On approaching the first peasant:

Initiate Zei Ri: "I'm positive that I heard something. We need to hurry to the menagerie."
Canthan Peasant: "Can anybody hear me? These animals have me trapped!"

Canthan Peasant: "Thanks. Any longer, and I might have been just another set of bones for those things to chew on!"
Initiate Zei Ri: "I'm glad you're safe. Hold tight. More of our forces should be coming through. They will escort you back."

On approaching the second peasant:

Initiate Zei Ri: "There's no mistaking it; there's someone still alive nearby. It must be coming from Foh Wing!"
Canthan Peasant: "Get back, you blasted monstrosities! Any closer and I'll kill you three times over!"

Canthan Peasant: "The Ministry of Purity! Please, let me join the fight!"
Initiate Zei Ri: "I like your spirit. Stay here. Some other members should be by soon to assist you. Speak with them."

On approaching the third peasant:

Initiate Zei Ri: "I hear someone calling for help... It sounds like it's coming from the island to the north!"
Canthan Peasant "Help! They've got me cornered out here!"

Initiate Zei Ri: "You should be safe now. Just wait here, someone will be along to see to you."
Canthan Peasant: "Thank you! I should have known that coming out here was a bad idea. I can't swim!"
Initiate Zei Ri: "It looks like these are all the survivors. Reinforcements will be here soon to clean up anything that reamins of the plague creatures. We can leave that to them; our work here is done."

The Ministry of Purity will handle the remnants of the plague here. In time, maybe this place can be something again. This is just a reminder of Cantha's condition: damaged and weakened. With our strength, we will treat the wounds she has suffered and help her grow into a stronger whole.
In the meantime, threats still persist on Shing Jea Island. If you are inclined to help, then I suggest you speak with Initiate Tsuriai at Seitung Harbor.

Since the builds used by the Afflicted pack a lot of punch, it is wise to take two monks; one specializing in Protection Prayers and one in Healing Prayers.

Start from Ran Musu Gardens and start heading northeast. There are 3 survivors at the following locations:

A. Menagerie
B. Foh Wing
C. Island to the North

Pull mobs one at a time as you go so as to avoid becoming overwhelmed. Survivors initially are not allies and will not be under attack. When you draw close (a bit further out than aggro range) they become allies and will be attacked. The first survivor will flee away from you, making it fairly easy to pull the foes to you. Note that the animals are heavy melee attackers. The second survivor is generally far enough back to avoid attracting the afflicted even once she becomes an ally. However, the afflicted mobs can be close enough that they are difficult to separate. The last survivor is the hardest. The survivor actually can change location as you approach, suddenly appearing closer to you and becoming an ally sooner than you would expect. Because of this you may wish to clear out all mobs surrounding the island (to avoid drawing extra mobs) and then running in with healing on the ally as you take on the final mob. 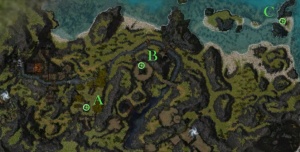 Location of the survivors
Retrieved from "https://guildwiki.gamepedia.com/index.php?title=Rescue_at_Minister_Cho%27s_Estate&oldid=1620060"
Category: