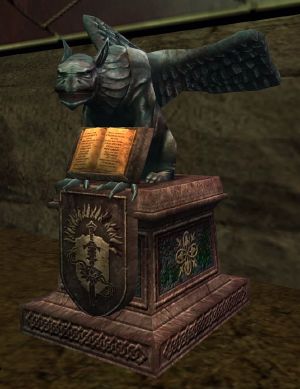 After killing the Siege Devourer and escaping into the tunnels, you will find four of these Research Journals as you help the Ascalonian spirits escape from the ghostly Charr. Each one will teach Gwen a new skill.

I encountered my first Charr today, and my hopes of slowing their assault were quickly dashed. If not for a spell I devised on the spot, I would not have survived this brutal attack. As a horde bore down on me, I manipulated the ether to imbue myself with the vigor of my youth. Thus, for a short time, I moved with the sure-footed speed of a child. However, illusions seldom last, and the body must eventually pay for the follies of the mind. After my narrow escape, I suffered much physical strain. And yet, better that than the unthinkable alternatives.
Skill Added: Illusion of Haste

The Charr move through the land with the speed and primal fury of a wildfire. I have begin to realize that simple defenses are not enough to slow this onslaught, so I have devised a new spell. It is actually a relatively simple matter to use the ether to alter the perception of an enemy, especially one so primitive as the Charr. In their minds, they believe themselves fatigued...atrophied, even...thus slowing their relentless assault. I only hope it is enough.
Skill Added: Shared Burden

Reports of Charr attacks arrive daily, so I have begun researching was to protect us from these beasts. By focusing the ether around my body, I can create a barrier. It is almost as though the air itself hardens, stopping arrows and deflecting blades. I need more time to perfect the spell, though. It requires an immense amount of concentration to maintain, and lapses in focus allow attacks to slip through. A bigger drawback is the Energy loss from exertion. Perhaps I can find some way to compensate for this...
Skill Added: Distortion

The Charr have come for us. All I can do is try to save my research in the hope that someone can use it to forge a better future for mankind. It was this overwhelming desire to stem the tide that inspired my last spell. I have found a way to use the ether to directly inhibit a foe's mind. The weave is complex, but when properly crafted the spell slows a foe's actions. It is as if he is moving through molasses. If only this could slow down the wave of inevitability about to wash over us. Perhaps some might escape...
Skill Added: Sum of All Fears