Revenge of the Yeti 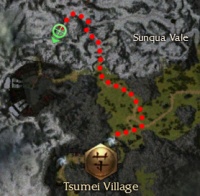 "Vengeance served, Wulk Cragfist has human to thank. Dead brothers' spirits now at peace. Take reward... but do not come this way again."

Find Wulk in Sunqua Vale, just west of the words "Sunqua Vale" on the map. He is a level 12 Hostile Yeti, but if you get his health low enough, he will submit to you and you will be able to talk with him. He asks for help in avenging his family. Follow him to the North, and help him fight. The Tengu are level 5 or so, but with Wulk's help they should be easy enough to dispatch. Let Wulk take the aggro first, since his level is likely higher than your character's level. Be warned though that some of the Tengu have damage over time attacks that can kill Wulk, even after you complete the quest.