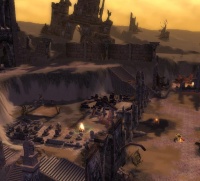 Rin burning and in ruins after the Charr invasion

Rin is the capital of the Kingdom of Ascalon. It is located on the western side of the kingdom, south of the Nolani Academy.

Rin became capital when Drascir, the ancient former capital, fell into the hands of the Charr.

Since the Searing Rin now also lies in ruins. Ascalon City has effectively taken over as the unofficial capital of Ascalon. However, King Adelbern still holds his throne in Rin and continues to organize the defense against the Charr from there with his son Prince Rurik.

During the Nolani Academy mission, players find out that Rin was burned by the Charr under Bonfaaz Burntfur and was about to fall into their hands. After saving the city with the aid of players and the legendary horn Stormcaller, Prince Rurik and many Ascalons decide to flee their homeland through the Northern Shiverpeaks and accept the invitation of shelter in Kryta.

Rin is also one of the three destinations to which the Lich Lord sends his army of Titans during the last two missions of the game.

The quest A New Guide makes reference to investors from Rin, which could mean it has begun to rebuild after the Charr were driven off. However, since the quest giver does not realize that he himself is a ghost it is likely that he died before the Searing and has no knowledge of current events in Ascalon.