Riven Earth is an explorable area on The Tarnished Coast. It takes its name from the deep canyon that runs through the center of it, containing a river that (oddly enough) seems to flow Southeast to Northwest, despite the sea being so close to the south. Some have speculated that this is the source of the Ullen River, but this cannot be confirmed. Much of Riven Earth is composed of cliffs and ledges around this canyon, though in the southwest, near Rata Sum, there is a large, fairly open forested area. 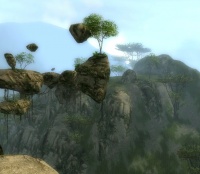 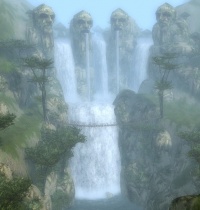