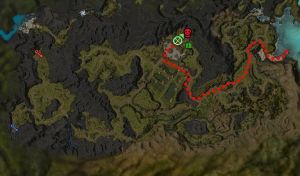 A Little Help From Above

You start out from the coast on the east side. This is also the point were you will be resurrected after a party wipe. When following Paulina's advice, you will need to go all across the map to the far NW (where the Riverside Province mission starts) and the far SW (where you meet Saidra during the mission); the bosses are indicated as a blue and red key on your Mission Map. Obtaining the keys will allow you to open the rear entrance to the NE of the Temple of the Unseen (where you meet Dinas during the mission. However, this approach is not recommended as it takes much more time, and offers very little advantage. Using the direct approach, you go straight to the Temple of the Unseen. Advance NW to the guard tower; each tower is guarded by a Jade Cloak. Either fight or sneak past the tower, being carefull with aggro, and continue SW, taking out odd groups of White Mantle. Round the bend and continue NW. To enter the temple, there are 2 possible approaches: you can either clear the front gate, and enter from there, or you can take the path east of the temple, towards the rear entrance. Though the gate is closed, you can still enter the temple via the alley where Cairn the Cunning's group is. The latter is generally the faster and easier choice. Fight your way to the Ether Seal, then carefully pull each group to fight them outside the Seal's range, including some pop-ups NE of the Seal. When the area is clear, destroy the Ether Seal itself to access the north part of the temple. Willem the Demeaning is on top of the stairs to the north, guarded by a Jade Bow, a Jade Armor and a Jade Cloak. To the right is Justiciar Kimii's group. Though this group can be avoided, attempting to do so is very risky. The Jade constructs can be lured and killed without aggroing Willem. Finally kill Willem to complete the quest.