Location: The Mirror of Lyss, just outside and south-west of Grand Court of Sebelkeh
Collecting: 5 Roaring Ether Claws 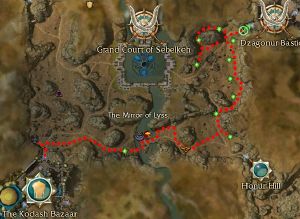 Groups of elementals in the Mirror of Lyss.

The Mirror of Lyss
Follow the basic directions for Lightbringer point farming here, except that you can do it in normal mode and there's no need to cross the area to kill the boss.

Forum Highlands
From Tihark Orchard, head southwest and go into the second gorge on the left. At the bottom of the root bridge, 3 groups will converge; these groups will be either 3 Roaring Ethers or 2 Ethers and 1 Sapphire Djinn. The boss group with Churahm, Spirit Warrior will have another 3 Ethers, and the 3 groups of djinn will sometimes contain an Ether. Once you're done with these groups, go to the south and then, after the harpy group, to the west, and you should meet three groups of roaring ethers with the boss Korshek the Immolated and assorted djinn.

Pre cast WoP and SoD, DP+SF before engaging, make sure to make a nice ball, cast Glyph, MoR, FS or BoC, wait a few seconds and cast last AoE. If lucky all should be dead by now, but most of the times 1 Roaring Ether survives and will res. The ressed Ether won't res more most of the times. I used this build to kill mobs starting from Dzagonur Bastion.