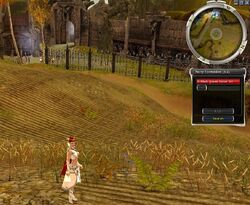 An example of rubber banding

Rubber banding is a colloquial term applied to the event in which you travel to a point, and then shortly jump to a point you were a few moments ago. This may or may not be a result of lag, depending on the situation. When running, it may also happen as a graphical glitch, when the runner is caught in a group of enemies (also referred to as being body-blocked), and will run forward without realizing they are still stuck among a mob of monsters, and this occurrence is unrelated to lagging or latency.

Rubber banding can make a character appear to pass zone markers without re-zoning: